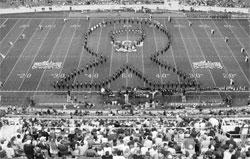 The Horned Frogs will add new colors to their uniforms for TCU’s Pink Out football game against San Diego State on Saturday.The TCU football field will be filled with about 600 breast cancer survivors and supporters from TCU, the Susan G. Komen Breast Cancer Foundation and the Fort Worth community during halftime. All participants will wear pink to benefit the foundation and the fight against breast cancer, said Ann Louden, the chancellor’s associate for external relations.

Louden said the band will form a pink awareness ribbon, the cheerleaders will perform with pink pom-poms and members of Zeta Tau Alpha will hand out awareness ribbons at the gates to promote its philanthropy, the Susan G. Komen Breast Cancer Foundation.

“We want to communicate that TCU has a role to play,” Louden said. “This is a real link between the community and TCU. It is a real message of how the TCU campus is supporting this cause.”

Last year, board and staff members from the foundation came to TCU to ask how they could raise awareness in Fort Worth by joining with the university, Louden said.

“I worked with Gary to get the awareness decals put on the back of their helmets and the ribbons for the coaches’ shirts,” Patterson said. “The team’s involvement is limited because they have a lot going on during the season.”

Louden said she is helping to create a multimedia halftime show featuring the stories of two faculty members, two staff members and two students, whose lives have been affected by breast cancer. After the presentation, pink balloons will be released to recognize those who have been affected, she said.

Louden was diagnosed with breast cancer in September and said since she is a part of the group affected, she can help communicate the message about breast cancer.

“From my vantage point, the people I have most enjoyed talking to during this time are the people who have gone through it,” Louden said. “I think the TCU stories are important because until you realize who is here and who has had breast cancer, you can’t personalize it.”

Ashley Wilson, Panhellenic delegate for Zeta, is helping to get students involved during the halftime show. She said only the breast cancer survivors stood on the field during halftime last year but expects more students to get involved to show their support this year.

“I hope that by people telling their stories, it will increase awareness,” she said. “Breast cancer is not something we should be afraid to talk about.”

Robin Forner, a junior international communications and Spanish major, lost her mother to breast cancer during her freshman year. When she heard about Pink Out, she said, she wanted to get involved and record a story about her mom, which will be played during halftime.

Jennifer Braatz, a sophomore business major, said her mom was diagnosed with breast cancer in August and will share her mother’s story during the halftime show, as well. She said after she started telling her story, she met many other people who had been affected by breast cancer.

“Sometimes it feels like we’re secluded here on campus, away from everything, but we need to realize that people are affected by this,” Braatz said. “Hopefully people will stand up to it and donate money and help find a cure.”

Kelsey Patterson said although her family has not been directly affected by breast cancer, she said she believes it is important to support others.

“Just because it hasn’t touched our family doesn’t mean we aren’t touched by it,” Patterson said. “If we can get the funding we need, hopefully we can find a cure.”

Kelly Imig, assistant director of athletics marketing, said $5 of each online ticket sale and 25 percent of all Pink Out merchandise, including T-shirts and hats, will be given to the foundation. Last year, $16,000 was raised for the foundation, she said.