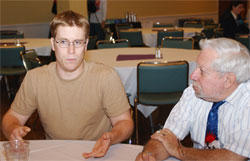 Although a resolution on the plus/minus grading system was not reached, a vice chancellor said all who attended Monday’s forum have a better understanding about the issue.The plus/minus forum in the Student Center Ballrom let students speak face-to-face with faculty members about the plus/minus system.

“Faculty has tried so hard to put this together,” said Justin Brown, a sophomore political science major. “They adjusted their schedules, and the high number of faculty in attendance shows that they really do care about student interests.”

After Nowell Donovan, provost and vice chancellor for academic affairs, gave a slide-show presentation, students and faculty separated into groups to discuss the plus/minus system.

Joshua Long, a senior accounting and finance major, said some students are worried the plus/minus system could interfere with activities on campus.

“I think that students are concerned that using a plus/minus system would take away from extracurricular activities because students would have to spend more time studying for their classes,” Long said.

“TCU is not an academic powerhouse,” Andrew said. “TCU is more than just a school about academics. Extracurricular activities and organizations are a big part of TCU as well.”

Members of the faculty said the idea of using a plus/minus system is not to increase TCU’s academic standing.

“The Academic Excellence Committee’s goal of implementing a plus/minus system was not so that TCU could better compete with other universities in academics,” said David Grant, professor and chair of the religion department. “We came to a decision to look at the current grading system and see if there was a better way for the faculty to evaluate student performance.”

Brown said earning a 4.0 is another concern for students.

“For the most part, it seems students’ biggest concern is the 4.0 will become much harder to achieve,” Brown said.

Brown said these students should voice their opinions.

“They should do research and maybe find another solution other than a plus or minus added to their letter grade,” Brown said. “The Academic Excellence Committee and all faculty at TCU want students to speak out on any issue that students have concern for.”

Geology professor John Breyer said if a plus/minus system is used, students would not have to make a single A to keep their scholarship requirement of a 3.25.

“You can keep a scholarship and get a B+ in all of your courses,” Breyer said. “I also think that students are forgetting that grades alone do not get you a job or into graduate school.”

Donovan also said the Academic Excellence Committee could possibly revisit this issue and make possible adjustments to its proposal.