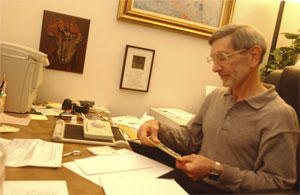 Most 14-year-olds aren’t exactly wrestling with life’s more important decisions. Their big decisions usually involve whom they should sit by at lunch, whom to ask to a school dance or how to stretch that curfew by just a few minutes.

But at age 14, Charlie Calabrese made a choice that would govern the rest of his life. He decided to become a Catholic priest.

At the end of his eighth-grade year, said Calabrese, the TCU Catholic Community campus minister, he entered the seminary on a 12-year path toward ordination, an idea he first posed to his grandmother three years earlier. “She said, ‘No, no, no, you’re going to be rich and famous – you’re going to become a doctor,'” Calabrese said. “That was what she thought rich and famous was.”

Calabrese, who has been at TCU since October of 1984, admits now that he had no idea what it really meant to become a priest in fifth grade, and said that after his grandmother’s initial discouragement, he didn’t mention entering the priesthood again until eighth grade.

But the idea never left him.

“My dad didn’t want me to go (to seminary),” Calabrese said. “He said, ‘Have a normal high school experience. If you still want to go after high school, that’s fine, but I think you’re too immature, too young to make this kind of a decision.'”

Calabrese said looking back, his father was right: A 14-year-old could not possibly make that kind of decision. He said he constantly had to renegotiate his decision and sometimes doubted that God wanted him to become a priest.

“There were times I would wake up one morning and I would think, ‘yeah, I need to be a priest,'” Calabrese said. “I’d wake up the next morning and say, ‘I don’t think so.'”

Calabrese said he never heard a voice from God telling him to be a priest or got any clear indication that was what he should do with his life, but in the end, after a lot of prayer, he got the subtle feeling that being a priest was right for him.

“I since continue to believe that God supports our decisions in life and works,” he said. “I think God is so much of a realist that God takes a serious thing, works with us in the present to work out the future, but doesn’t have the future already mapped out. We have to try to figure it out.”

“Father Charlie has given so much time for TCU, but he’s always willing to give more time,” Morningstar said. “You can come to Father Charlie with any problems you have and he’ll do whatever he can for you.”

Morningstar, a senior marketing and management major, said Calabrese shows a passion for his work and his light-hearted, caring and understanding nature can benefit everyone at TCU, not just those of the Catholic faith.

“I really think that somebody who wasn’t even spiritual could – if they were having problems – they could come in and talk to Father Charlie,” Morningstar said. “He would really take the time to listen to them and really be there for them and try to understand what they’re going through.”

Calabrese said he entered campus ministry in 1976 at Ohio University, but that the choice wasn’t his. In those days, Calabrese said, a priest would go to his mailbox and find a letter from the bishop informing him that he would have a new assignment in two weeks.

“I didn’t know what to expect,” said Calabrese, who had been ordained four years earlier. “I found that I liked it very much and enjoyed working with students, but I had no idea what it was going to be like.”

Calabrese said he hit it off with the students and faculty at Ohio right away and found they were eager to include him in their lives. He had been at Ohio for eight years, he said, when he took a trip to Fort Worth to visit some friends and found there was a vacancy at TCU.

The idea of being an official part of the campus at a private university intrigued Calabrese, he said, and soon after, his bishop in Ohio loaned his services to the bishop of Fort Worth.

“All of that was going to be new to me,” he said. “I found it attractive to be working with campus ministries of other denominations.”

Sister Donna Ferguson, a nun with the Catholic Diocese of Fort Worth, said she met Calabrese on his visit to Fort Worth more than 20 years ago when she was doing work with campus ministries at TCU.

“The impression was that he was extremely honest,” Ferguson said. “He’s very intense and very sensitive.”

Sister Ferguson, who Calabrese called his spiritual director and said knows him better than anyone else, said Calabrese is “a deeply faithful, true priest” who knows how to listen and is compassionate.

“He is very present to individuals. I think his focus probably is very attractive to individuals who are having a difficult time,” she said. “He practices what he preaches.”

Calabrese said he constantly prays for the ability to respond to people’s needs in the best way possible and to be open to everyone who comes into his life.

“What I pray for is that God will let me be God’s tender love in people’s lives. That’s a bottom-line prayer that I pray on a daily basis,” he said. “Everyone doesn’t necessarily want to belong to our community or to be in a relationship with me, but I do believe there’s room for everybody and I think I am a welcoming presence.”

Jessica Searcy, a junior communication studies major and member of Catholic Community, said Calabrese is easy to talk to and makes students feel like they are a welcome part of the community.

“He’s there to listen and help, and he’s not there to judge,” Searcy said. “He doesn’t preach to you and tell you what you’re doing is wrong. He’ll give you advice.”

One of the best parts of being at TCU is getting to see the spiritual growth a student experiences over his or her time at TCU, Calabrese said. He said he’s always gratified by the way students instantly accept him as part of their lives.

“I guess that’s one of the fringes of being a priest or minister – that people take us into their lives,” he said. “That most sacred part of their life, they share with us – their most intimate.”

Though Calabrese said he is happy to see students grow over their TCU careers, he said it’s never easy having people he’s formed connections with leave his life so often.

“I cry,” he said. “I’ve gotten very close to some students. I feel sad when they leave. I’m glad that they’re leaving and moving on with their lives, and I know they’re excited. Some of them are sad to leave, also.”

But Calabrese said there is always a fresh crop of students who come along, not to replace people from his past, but with whom to form new relationships.

Morningstar, who is active in Army ROTC, said Calabrese understands the college student and appreciates and accommodates busy students like him.

“He understands that I’m very devoted to my faith and willing to help, but he also understands that that’s not the only thing I do,” Morningstar said. “He’s always understood that I want to do what I can for Catholic Community but that I’ve got other stuff going on.”

Sister Ferguson said Calbrese’s ability to understand the hectic schedule of students and keep them involved with God is a quality that has served him well in campus ministry.

In addition to working with students, Calabrese said he also gets the chance to work with faculty and staff and their families. He said one of his most rewarding moments in campus ministry came recently when he went to lunch with the spouse of a staff member who he had been meeting with for several weeks.

Calabrese said he did not want the spouse’s gender identified for reasons of confidentiality, but said he was moved by the words that person said to him on a damp and cloudy Thursday afternoon.

“You are the sunshine of my day,” Calabrese recalled the person saying. “You just – you just brighten up my day. I’ve never met a priest that I have found to be so joyful and so loving as you.”

Calabrese said he was initially surprised that the person hadn’t found joy in the lives of other priests, but that he was deeply touched by the words and felt grateful to be a part of that person’s life.

Even though Calabrese has helped so many through rough patches in their faith lives, he said he, too, experiences doubts.

“It’s human to doubt, to wonder, to have fear crop up,” he said. “To wonder, in those dry periods of our prayer life where we don’t feel the presence of God, is God really present? Have I done something to harm my relationship with God?”

He said he has relied on the insight and wisdom of Sister Ferguson to set him straight in his spiritually trying times and every spiritual adviser needs guidance in order to guide others.

Despite his doubts, Calabrese said he has formed an intimate relationship with God and is happy where he is now: experiencing the joy students bring into his life as he helps them appropriate the Catholic faith in a mature way.

“I used to think there was some place to go – a certain degree of holiness I had to have or there were stages in the spiritual journey I had to fulfill,” Calabrese said. “I just reached the conclusion there’s no place to go. In a sense, there’s nothing to do except do what I’m doing – to be present in the moment.