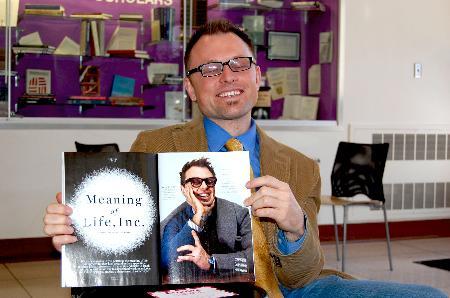 Alex Lemon, a first-year English professor at TCU, looks much younger in a wrinkled blue shirt, yellow paisley tie, brown suit jacket and jeans than the authors he reads.

But Lemon, who has written two books of poetry, “Mosquito” and “Hallelujah Blackout,” and has a third on the way, didn’t start writing seriously until he had a surgery in 1999 to remove an abnormal growth in his brain stem. The growth was removed and the bleeding in his brain was stopped, but the surgery deprived Lemon of the ability to speak, walk or see.

Lemon has recovered enough to see his poem “Being There” published in the January issue of “Esquire”.

“Everything shifted,” Lemon said. “My realization about myself and my thoughts about the world all changed and cohered into a life that I hadn’t imagined before.”

Lemon said he had been a political science major at Macalester College and intended to go to law school before the surgery, but had to take off a year for his recovery. After getting encouragement from his professors, he decided to pursue writing at the University of Minnesota, Lemon said. His recovery marked a change in his future plans for writing, elevating it from his hobby to career, Lemon said.

Spenser Davis, a sophomore radio-TV-film and English major and one of Lemon’s former students, said that being taught by a nationally-recognized writer helped him get excited about writing because it gave him a glimpse into the life of a professional writer.

Like most beginning authors, Lemon received many rejection letters before his collection “Mosquito” was published in 2006. The work focuses on his recovery from surgery and the emotional and physical effect it had on him, Lemon said.

“Writing is such an intimate thing and you invest everything you have in it, and it’s so personal that it’s hard to be rejected,” Lemon said. “It feels like a rejection of the self, of the person instead of the writing.”

Lemon’s second collection, “Hallelujah Blackout,” was published in 2008 by Milkweed Editions and he is working on a third collection of poems that will be more playful than his previous work, Lemon said. Lemon said he had to write about his experiences with brain surgery before he could move on to other parts of his life.

Jim Cihlar, managing editor of Milkweed Editions, said that Lemon’s work is a unique mix of experiment and art.

“He brings a lot of energy to his writing, to the cause of poetry,” Cihlar said.

“It’s very powerful subject matter that deals directly with his violations, his sense of what that does to a poet’s perception of the world,” Cihlar said.

But unlike most poets, Cihlar said that Lemon does not only focus on the despair.

“Alex has a lot of darkness and a lot of anger and it’s all very justifiable,” Cihlar said, “But what really amazes me is his constant returning to the world and to life.”

At no point, though, did Lemon encounter writer’s block, he said. Lemon said he doesn’t believe in the ailment because there is always something to chronicle. The greatest difficulty is finding the time to write when he is spread between teaching and revising his old work, Lemon said.

Dan Williams, chairman of the English department, said he and his colleagues are extremely pleased to work with Lemon.

“He is a young poet of exceptional accomplishments,” Williams said. “He has to this date established himself as one of the best emerging poets in the nation.”

But Lemon said inspiration does not always come easily.

Lemon jots down ideas for future poems using a voice recorder and revises old work, he said. After the surgery, Lemon said he never fully recovered the ability to write by hand, so he prefers to use a voice recorder to take down ideas.

In addition to teaching and writing, Lemon is also coordinating the Creative Writing Awards, which will be presented March 3 at the Kelly Alumni Center. The event will feature Ray Gonzalez, one of Lemon’s mentors from the University of Minnesota, as the keynote speaker and will contain the presentation of 27 awards for poetry, criticism and research paper writing.

Lemon said he doesn’t think he’ll ever be completely happy with any of his poems and plans to keep working for what he sees as the unattainable poem.

“I’m glad they are not the poems I’m striving for or I would stop writing,” Lemon said.

“It’s always a thrill to see something I’ve written be published,” Lemon said. “I’m always amazed that people would want to read it. I’m just pretty happy to be alive,” Lemon said.