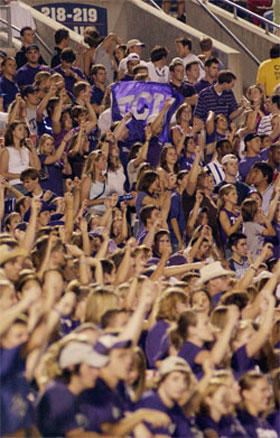 In the beginning, God created the heavens and the earth – and years later, football.This new creation gave birth to rivalries, which released the competitive spirits among avid football lovers around the country.

The TCU-SMU rivalry dates back to 1915, and the 86th meeting in the series took place Saturday in Dallas.

The SMU Mustangs saddled up against the TCU Horned Frogs in a fierce competition known as the Battle for the Iron Skillet. The original Iron Skillet, created after World War II, has since been lost, but the trophy was revived in 1993.

Many fans still hold strong feelings about the rivalry.

The atmosphere was tense at the game Saturday. TCU fans filled the stands to watch the Frogs face off against the Mustangs.

Prior to the game, tailgate parties lined the SMU campus.

SMU fans wearing shirts that read “TCU Sucks” surrounded Frog fans and reminded them how real the rivalry is.

TCU lost the game 21-10, which some Frogs found hard to take.

“SMU is a different school, with a different attitude, but nothing like TCU,” said freshman business major Jeff Dillon. “And, as much as I can’t stand them, they were a good reality check to the Horned Frogs after the victory last week in Norman, (Okla.).

“I want nothing to do with any of those students, and I hope we smoke them in years to come.”

“The way they reacted to the TCU student body was ridiculous, but expected, because of the rivalry,” English said.

The rivalry does not stop with current students. TCU alumni also have firm emotions involving SMU.

“Both teams have always had strong feelings against one another,” said Dan Kasper, a former center for the TCU football team. “Whenever we played at their house, we were always greeted by boos and harsh comments, but it was the same circumstance when they came to Fort Worth. There was always a hard fought battle, as both players and fans were at each other’s throats, no matter where the game was held.

“The camaraderie our team showed will always be a highlight of my college career. I have been, and always will be, a proud Horned Frog.