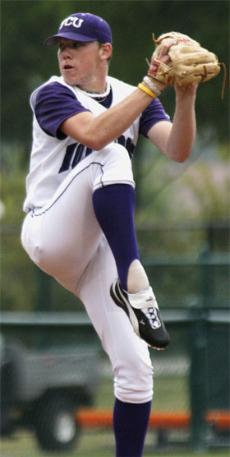 What kind of pitcher are you: Power or finesse?I would say I am more of a power pitcher.

Well, because I am left-handed and, for most left-handed pitchers, I guess I could say I have an above-average fastball. I like to throw my fastball.

Is that your best pitch?

I guess you could say so.

If you could meet any professional baseball player, who would it be and why?

Well, the professional baseball player I always wanted to meet is actually dead now. That was Ted Williams. I am a huge fan of Ted Williams.

Are you a big Boston Red Sox fan?

I actually wasn’t until two summers ago when I played in Cape Cod and went to a Red Sox game and experienced the Red Sox Nation.

Why would you want to meet Ted Williams?

Just the way he approached the game and him being one of the best hitters who ever lived. As a pitcher, it would be amazing to talk hitting with him to figure out how much hitters approach it, considering there are a lot of people who still take lessons from him.

Before you pitch, what is your pregame ritual?

Being my goofy self, usually I like to eat waffles with strawberries and whipped cream in the morning. It has become sort of a big deal when we go on the road and I kind of have to make it myself. I like to think of myself as a little bit of a culinary artist. But other than that, it is just have fun and when the time comes for me to go out and do what I do, I go out and do what I do.

Before your no-hitter, what was your greatest pitching accomplishment at TCU?

At TCU… I would have to say the eight innings I pitched against Baylor last year. It was a big Tuesday night game and a huge RPI game for us. I never really liked Baylor because they sort of screwed me up during the recruiting process coming out of high school.

What would it take to pitch a perfect game?

You have to be able to throw strikes consistently. Honestly, a perfect game should not be a pitcher’s accolade. It should be a team accolade. I have never seen anybody strikeout everybody in the game. The defense has to play perfectly and the pitcher is just a part of it. It is more of a defensive and team award than it is a pitcher’s award.

If you weren’t a pitcher, what other position would you want to play?

I would have to say outfield or first base because I played those in high school. I love playing in the outfield because you get to run around recklessly after fly balls. And first base, me being left-handed, first base is the only place I can play in the infield other than pitcher. It would be fun to play that.

Are you a good hitter?

I used to be, but when you don’t touch a bat consistently for three years your skills kind of diminish a little bit.

Who is the best hitter you have faced?