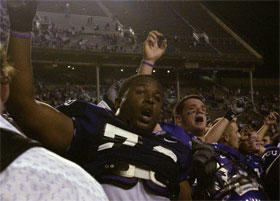 If you could play one other position in football, which one would it be and why?(Wide) Receiver because I probably feel like I’d be a playmaker, and I always want to have the ball in my hands. I’d probably do crazy things when I scored a touchdown.

After all your years here, which teammate have you built the most respect for?

What’s the best thing about Gary Patterson as a coach?

His intensity. He expects you to be perfect. He pushes everybody to be the best they can be.

You were named a preseason third-team All-American recently – how big of an honor is that?

It’s a pretty big honor. Matter of fact, the first time I found out about it was when I walking out of film. I saw coach Patterson, and he told me congratulations. A lot of people have been in that position and gone on to do better things, and I just hope that I can not only prove that I’m an All-American, but go up further in the rankings.

That (championship) ring on your finger, you wear that everywhere?

Actually, I really don’t usually wear this one. This is the ring from the Fort Worth Bowl (in 2004). I usually wear around the Liberty Bowl (2003) ring because we were actually champions. I always wear that because it reminds me that that was the year we were actually champions, and I’m trying to get back to that point. So until we get our new rings (from 2005) on April 18, that’s the ring I’ll be sporting around.

What’s the hardest thing about being an offensive lineman?

The hardest thing about being an offensive lineman is you never get credit for doing the good things, but you always get credit for when everything is wrong. You kind of take the punches as they go. Being an offensive lineman, you have to be very strong-minded. When something goes wrong, you’re the first one to blame; you got to keep a level head.

Sometimes the football ignorants say that offensive linemen are just big and slow and relatively unathletic – what would you say to that?

Well, you look at the lines we had last year. I mean we only had a couple of guys over 300 pounds, and a lot of them could run and were very strong. (Senior guard) Shane Sims, he played at 290, and he bench pressed over 500 pounds and ran like a 4.8. Myself, I played all last year around 287, and I can move pretty well, and I can take on blocks and move people downfield, so its kind of a misconception.

Anybody you ever played against that you just hated?

I hated to line up against (defensive lineman) Chad Pugh. When I was a freshman and sophomore, he absolutely intimidated me. That’s only when I was 275, and he was a monster – he was like 320 – and the things he did to guards, center and tackles when they tried to block him were unbelievable. So I mean, when you just line up and you’re just purely terrified – it was probably Chad Pugh.

How much do you bench, Herb?

Have you ever stopped and thought that’s an unbelievable amount of weight to bench?

Yeah, because when I first started lifting weights before high school, I couldn’t even get 135 up. Me and my dad went to the YMCA and tried to work out before football, and I couldn’t do 135. Now, to sit here and think I’m pushing 440 off my chest, I still can’t believe it. I called my dad and told him I maxed out at 440, and he said, “Shut up.” He couldn’t believe it.

Have you always been big for your age?

Yeah. Actually, I didn’t get bigger until I moved in and stayed with my grandmother and grandfather. That’s when I just blew up and got huge. My grandmother would cook every day: breakfast, lunch. I’d come home every day, and lunch would be ready. By the time of middle school and elementary school, I was pretty much bigger than everybody, and then in high school it caught up with me.