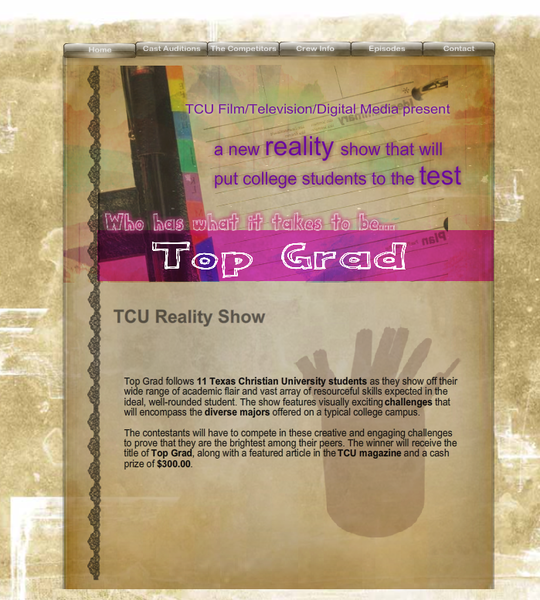 The phenomenon of reality television is coming to campus this February.

The Department of Film, Television and Digital Media is putting together its own reality show called “Top Grad” for the university this school year. The show will feature 11 student contestants who will compete in challenges to become the “top grad” on campus.

Special projects coordinator Julie Harrison said contestants will represent their specific majors and the challenges will also fall under the criteria of different fields of study. Each episode, the contestant who wins the challenge will receive either a small prize or immunity in the next competition, while the contestant in last place will leave the show.

To audition for the show, students were required to submit a short video of themselves and could not have class during the period in which filming would take place. The show has been cast and Harrison, a junior FTDM and communication studies double major, said contestant profiles are expected to be posted soon on the show’s website, topgradtv.com.

“Really, reality shows are what are very current right now, and at the same time, not only are they popular…They don’t cost a lot of money,” Harrison said. “They’re incredibly cheap and yet they draw huge audiences.”

Although the FTDM department will create the show, students of all majors are encouraged to participate, as there are many different facets of production, such as law or finance, she said.

Sophomore writing and French double major Bill Hamlett will be a contestant on the show. He said Harrison asked him to take part in the show and thought that it sounded fun and challenging.

He said he was willing to work with the time commitment because he felt the show was going to turn out well, he said.

“I’m definitely interested in the idea of the liberal arts, well-rounded student who can be successful in many different areas,” he said.

Filming will begin the first week of the 2011 spring semester, and the show will premiere Feb. 4. Students can watch episodes on the show’s website.

Harrison said the department was trying to have the show broadcast on the university’s TV channel, which is accessible on campus.

She said major channels TLC and the CW have also shown interest in possibly airing the show. Neither channel has contacted the department since the initial interest, so Harrison said she was not sure whether anything would come of it.