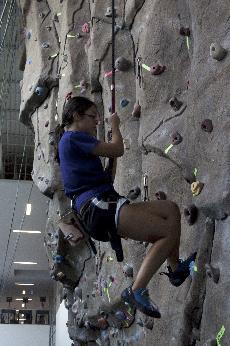 It’s one of the most recognizable features in the University Recreation Center, but the climbing wall has frequently stood unused. Until now.

Starting in June, the climbing wall became free to all students.

Joel Kronawitter, climbing wall staff member and junior political science major, said he has been working at the climbing wall since his first semester at the university in fall 2007.

“Usually at the beginning of the year we have a lot of freshmen come in but ever since it became free we’ve had a lot of sophomores, juniors and seniors come in,” Kronawitter said. “Our numbers are up. We usually have about 10 at the most that would come through a day when you had to pay for a pass, but now that it’s free we’re seeing like 30 or 40 people come.”

Cristie Carpenter, associate director of programs for the Recreation Center, said this change was made to try and increase participation.

“We talked about numbers, and it wasn’t that they were low, but we were just trying to figure out ways that we could increase a lot of things, and we looked at other schools, and we decided to go free,” Carpenter said.

Anyone with a Rec Center membership can climb, but classes to belay or learn basic skills are also available for $5 each.

Financially, the money the Rec Center was making from fees at the climbing wall totaled about $3,000 monthly, Carpenter said. The money, however, was not influential enough to impact the Rec Center’s budget, she said, which made it easy to decide to make the wall free with the hope of profiting elsewhere.

The Recreation Center offers a variety of other services in addition to the climbing wall, Carpenter said.

“Now that the wall is free and with all the other areas within Campus Recreation, we hope that people can, you know, utilize their finances toward group exercise, massage therapy or personal training,” she said.