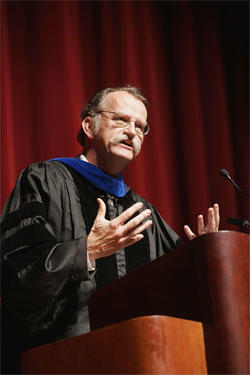 Accompanied by a performance of the TCU Jazz Combo, honors students marched in their black robes in the Ed Landreth Hall during the 44th annual Honors Convocation Thursday.The convocation celebrated the accomplishments of students who excelled in their fields of interest. Chancellor Victor Boschini read the names of five juniors and 30 seniors who were recognized for becoming members of the TCU chapter of Phi Beta Kappa.

According to the TCU Web site, Phi Beta Kappa is “the nation’s oldest and most respected undergraduate honors organization.”

The students who were recognized had met the requirements placed forward by Phi Beta Kappa to be accepted as a member, one of which involved having a GPA of 3.9 or higher for juniors and at least 3.7 for seniors.

In his short speech, Boschini expressed his appreciation for the students and said, “You are the reason we do all of this.”

Linh Tran, a senior biochemistry major, was one of the seniors who gained recognition for her academic achievements.

She said she likes the convocation because it gives students an opportunity to be honored at least once before they graduate.

“We were reminded that all our hard work is not wasted and we still have goals to meet,” Tran said.

Peggy Watson, director of the Honors Program, announced the names of the winners.

Watson said Long’s project is titled “Profiting for Public: A Test in The Ambition Market” and Moore’s project is “Hepatitis C: Studying Stigma.”

Dodson, who teaches honors students, said he felt “gratified and flattered” to receive the award.

He said the convocation is a way of showing students it’s important to balance their social lives and studies and it serves to inspire everyone at the university.

Peter S. Onuf, a professor of history at the University of Virginia, was invited to speak during the convocation.

Onuf said Jefferson celebrated the fact that the American people were “always ready to put down their plows to pick up their swords in order to defend liberty.”

Onuf said Jefferson’s words are something to live by.

Dodson said the speech was one of the most interesting Honors Convocation has had in a long time and that it worked well for the general audience.