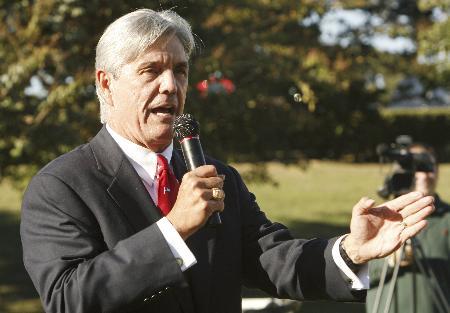 The vote of young adults in this year’s election is crucial, a former Texas Secretary of State and TCU alumnus said Monday at an early voting rally on campus.

“This is the most important election of your time, as well as my lifetime,” said former Texas Secretary of State Roger Williams as he addressed a crowd of more than 30 students and local community members at Frog Alley.

The rally was sponsored by the TCU College Republicans in support of Sen. John McCain’s presidential bid and local Republican candidates.

“It thrills me to look out and see all of you because I know the future of the state of Texas is fine,” Williams said.

Kimberly Dena, chair of the TCU College Republicans, said she was pleased with the support the organization has received from the students.

“It’s important to make sure that the students are knowledgeable about their local elections as well,” Dena said.

Several students voiced their appreciation for the state politicians in attendance.

Junior finance and accounting major George Becker said it is important for politicians to interact with the community.

“It’s the only way that they are going to get in touch with the people,” Becker said.

“It’s important to bring everyone together,” Look said. “It gets all the Republicans together to talk about the issues.”