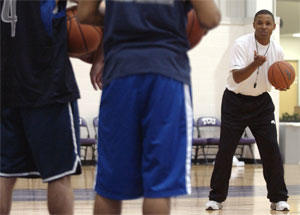 Residents of Brachman Hall participated in a simulated practice with men’s basketball head coach Neil Dougherty and his coaching staff Monday night.The practice served as a way for students to better interact with the athletics department, Dougherty said.

“(Resident assistant) Jason (Newton) had the idea of putting the kids through a semi-workout to help us further connect with the student body,” Dougherty said.

Newton, a senior engineering major, said he also figured it would be a good all-hall event for his residents since most of the guys in his dorm were basketball players in high school.

“A lot of my guys like basketball,” Newton said. “They wanted to get the opportunity to see what type of facility a D-I program has and what it is like to be coached by a D-I coach.”

Assistant coach Rick Callahan emphasized the importance of students being involved with their athletic programs.

“We want to give everyone that is part of the student body a chance to at least try out for their team,” Callahan said. “Because this really is their team.”

The students participated in many drills that the Horned Frog basketball team do every day in their practice. They worked on a variety of skills, including fast breaks and post play.

“We wanted to simulate a real practice for them as much as you can without them being in great shape,” Callahan said. “We didn’t want to fatigue them out there.”

Dougherty said he wanted the students to walk away from the experience having learned something about the game and how things are run for the Frogs basketball team.

“We really wanted them to feel like the real team,” Dougherty said. “They’ll get a big kick out of it if they ever come to one of the teams’ practices and they hear me telling the team the exact same things I was telling them.”

After completing the various drills, the students got a chance to participate in a simulated game. Dougherty said that was one of the best parts of the practice.

“That was fun to watch,” Dougherty said. “I enjoyed watching them really compete and run hard out there.”

Although they competed well, Dougherty said, they may need a little more work if they want to seriously consider competing for the team.

“Let’s just say they’re a little behind helping us out this year,” Dougherty said with a laugh. “But with some work, maybe we will see them in the future.”

Newton said he hopes his residents take what they learned and apply it to their own games.

“A lot of them play basketball, but don’t necessarily have real basketball skills yet,” Newton said. “The few pointers they get here can be real influential in their game.”

One of the students, Chris Cooksie, said the event was very informative and useful.

“Coach D was a very helpful instructor,” Cooksie said. “He showed us the fundamentals of the game on offense and defense. We got to run some drills and that was a fun time and I appreciate it.