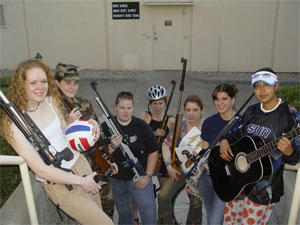 To understand the TCU women’s rifle team, first one must understand that each member is an individual bringing her own style to the shooting line, her own sense of humor, her own determination to accomplish a self-imposed goal and her own desire to be a part of something greater than herself.Senior Carly Snead said no physical ability is needed to compete in the sport.

“It’s all mental,” she said. “You’re competing against yourself. It’s all you.”

On the firing line, it’s every shooter for herself, but interview them in a group and you get shouts of laughter and women who finish each other’s sentences.

They see themselves as a collective unit – a team. One with a character so unique it can be hard, even for team members, to describe.

Take this simple question: If the team were a color, what color would it be?

“I think it would be black,” junior Emily Conway said, “because we want to be intimidating.”

“And purple because it’s our school color, and it’s a nice girly color,” she added.

But black is a little too plain, said Nikki LeCompte, a junior communication studies major.

“I would say orange,” LeCompte said just before a high-pitched giggle.

“Because it’s a spunky color, and we’re spunky!” LeCompte answered.

By the end of the conversation, team members had decided that they were black, purple and orange with chartreuse polka dots and glitter.

It was apparent, however, that most of them especially gravitate toward 2003 All-American Celeste Green, the team captain, for advice and support.

“Celeste is so committed to the team,” freshman nursing major Kristine Tisinger said. “She’s there when I arrive at the shooting range and she’s there when I leave. She’s very serious about shooting.”

Snead and LeCompte said Green’s determination and her ability to motivate everyone makes her a great team captain, as well as a great friend.

“I know that if I ever have a question about shooting, I can go to Celeste,” Snead said. “She’s a goofball like the rest of us, but when it comes down to business, she knows what she’s talking about.”

Freshman Aida Garcia said she looks up to Green because of her many experiences and the way she is always around to lift everyone’s spirit.

From the look on Green’s face, it was easy to see how she feels about her teammates’ comments.

“It really means a lot to me,” Green said. “It’s a lot of responsibility, and I try my best to influence my team by example.”

There was a brief silence followed by a signature burst of laughter.

“I’m closer to them than anyone else on campus.”

The shooters spend anywhere from 10 to 20 hours a week practicing at the range.

Head coach Karen Monez, who is in her second season with the rifle team, said she sees each shooter at least three times a week.

So far this year, the team has set records in both air rifle and smallbore, when they competed against Air Force.

“They have an enthusiasm for shooting,” Monez said. “They like to do it, and they strive to excel in it.”

LeCompte said she likes more than just shooting; she likes the atmosphere as well.

“The best thing is that it’s friendly and relaxed,” she said.

So which animal best describes this atmosphere and enthusiasm?

“I think it’d be a monkey,” LeCompte said, grinning from ear to ear.

Green added, “And Tanya Gorin would be our Jane Goodall.”

Gorin, a freshman from Mesa, Ariz., laughed so hard she had tears pouring from the corners of her eyes.

Amid all the laughter, they managed to tone down a little bit and talk about traditions.

“With this being a new team and us having a new coach, we haven’t really had time to develop any real traditions,” Green said.

However, they decided the closest thing to a tradition was the fact that the coach makes them take a picture with statues of animals on each road trip.

As they remembered past trips, questions like, “What animal was that? An elk?” floated through the air.

Their giddiness was so real that the atmosphere in the room filled with a strange Christmas-like spirit.

“What makes this team a team is that we genuinely like each other,” Snead said when the laughter had calmed. “We’re not one of those teams that can get by on how much people are aware of us. For the most part, people don’t even know TCU has a rifle team.