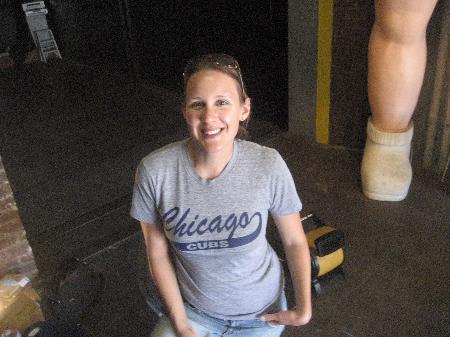 In the seven years since she left TCU, Kate Simonides has worked with vampires, awkward writers, FBI agents and farmers.

An alumna of the radio-TV-film program, Simonides, which rhymes with “commodities,” has worked in the production of over 10 television shows, including “Angel,” “Curb Your Enthusiasm,” “Criminal Minds” and the reality show “Farmer Wants a Wife.”

She returned to TCU to lecture to RTVF majors on her production work in the television industry on Feb. 2.

“What I do in production, it’s a lot of freelancing,” she said. “You go from show to show.”

After graduating from TCU in December 2001, Simonides said she went to Los Angeles and found her first job on the set of “Angel” as a production assistant. She said she once ran half a mile to catch actress Gina Torres (“Firefly,” “Angel”) before she reached her trailer to remove makeup so the crew could finish a scene.

She said “Angel” remains one of her favorite series she was a part of, mostly because it was her first show. “Curb Your Enthusiasm” is the most unique because of the improvisations of the show, Simonides said.

Simonides said she has always had a deep interest in movies, and the RTVF department sealed her future.

“I was a big movie geek,” she said. “I thought about going into science or biology, but then I realized that if I really liked film that much, I should just go for it.”

While attending TCU, Simonides said she had two internships that helped put her on the path she is on now.

Her first internship was with NBC in Los Angeles, which she got with the help of Richard Allen, head of the RTVF department.

“You’re not going to be able to teach somebody everything they might need to know, especially with technology changes,” Allen said. “The fields that she’s been in, like the reality shows and nonscripted programs, didn’t even exist when she graduated. She’s a good example of someone who learned how to learn.”

The next summer she was accepted into an internship for the “Late Show with David Letterman” in New York, Simonides said.

“Internships, networking and taking jobs even if you’re not sure you want to go that direction are the best things you can do in the industry,” Simonides said.

Taking a variety of jobs helped her network, she said. A crew she worked with for a couple of days would eventually call her back to work on another project.

“It’s a lot like six degrees of separation,” she said. “Somebody mentions somebody, and it’s like ‘Oh, I’ve worked with them before.’ It’s a big chain.”

RTVF alumna Andrea Valiso currently works as an office production assistant on the television series “Without a Trace” and says the Horned Frog community is growing at a steady pace in the Los Angeles area.

“There are more TCU RTVF alumni out here than I ever imagined,” Valiso wrote in an e-mail. “We are all doing different things in the business, but we are definitely carving out careers for ourselves based on the major we chose in college and the education we received from TCU.”

“The production logistics just blew my mind,” Simonides said. “I’d like to travel with the crew and do that.”

Simonides’ current project will appear on the Sci-Fi Channel under the working title “RelicQuest,” which will premiere later this spring. As associate producer, she created the production schedule, coordinated the shoots and delivered the show to the network in the post-production process.