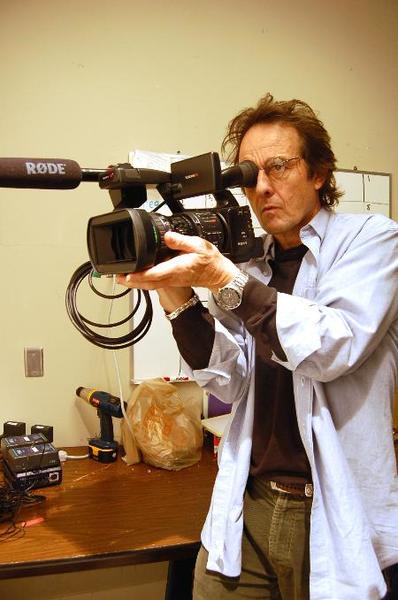 Radio-TV-film instructor Greg Mansur encourages his students to use their creativity to find answers to existential questions. Through his work in film and experimental photography, he’s still looking for answers of his own.

Mansur said he had no idea what to expect when the university hired him to teach filmmaking in 2001. He knew he loved film and photography and he knew teaching would be an opportunity to inspire others to do the same, he said. But he did not know what effect he would have on his students.

As it turns out, he said, many of his students were excited about his classes because of the way he teaches.

“In all my classes, I try to create an environment where you are pushed as an individual to explore not only the theory of the subject, but how to actually go out and use it in your life,” Mansur said.

Mansur said he understands the self-discovery that college students experience, and he remembers being at that stage.

“I went through a million different shades of gray trying to figure out who I was, what I really liked, and what I wanted to do,” Mansur said.

In college Mansur wanted to be geneticist and then a microbiologist, but his passion was for photography, which seemed to be an irresponsible career choice, he said.

“Microbiology or genetics seemed like a smart career, where I could probably find a very nice girl to marry me and live happily ever after,” Mansur said.

However, Mansur said he is glad he chose a career in photography.

Mansur received his undergraduate degree in film studies and communications at Rhode Island College and his Master of Fine Arts at TCU. He has worked for CBS as a freelance filmmaker in San Francisco and had his own digital media company in Minnesota.

His documentary work has received the most recognition, he said. Working on a documentary on American painter Rockwell Kent for 13 years, Mansur said he traveled to Iceland, Greenland, Argentina and other countries to film with director Fredrick Lewis. Mansur said he was a changed person by the time he was done.

“I had really seen the world,” Mansur said. “I sat in pubs in Ireland and met local farmers who were throwbacks of 100 years ago – people who don’t have iPods and iPhones.”

The documentary, “Rockwell Kent,” aired on PBS, at the National Gallery of Art in Washington D.C., the Amon Carter Museum and many other locations, Mansur said.

While he may find the most success with his documentaries, Mansur said his passion is fiction. In 2006 he finished “Date.CON,” a short film that was screened at the Magnolia Theatre in Dallas, he said. The film features a man who tries online dating, which turns out to be a disaster, Mansur said.

Mansur’s company Random Order Entertainment, which he founded with his wife, also entered a 24-hour film festival in Dallas, where the company had one day to produce a short film, he said. The company won first place, and his trophy is on display, albeit tucked away in the corner of a top shelf in his office.

“See, I treasure this highly,” he said sarcastically.

When it comes to teaching, Mansur said he is interested in what his students create, not what they memorize. Some days, he said, he walks into the classroom and students look asleep. To get conversation flowing, he asks his students what they dreamed last night or what movies they have seen recently.

“I want my students to discover their passion for film, for art, for storytelling,” Mansur said.

If there are any themes running through his personal films, he said, it’s of identity and figuring out what makes people who they are, he said.

“It’s a process of self-discovery that I’m interested in, an exploration of identity,” Mansur said.

Mansur seems to have helped many students in that process.

Chris St. Pierre, a 2004 alumnus, said he didn’t know what he wanted to do before taking Mansur’s post-production class. St. Pierre is now a movie trailer editor in Los Angeles and has cut trailers for movies such as “Harry Potter and the Order of the Phoenix” and “Sweeney Todd.”

St. Pierre said Mansur would take time out of his weekend to lend a hand to students, whether it be on location when they are filming or coming over to their house to help.

“He is more passionate about the art than anyone I have ever met,” St. Pierre said.

Senior RTVF major Joey Parr is in Mansur’s post-production class and is a member of the Student Filmmakers Association, a student-run organization that makes short films. Mansur is the faculty sponsor for SFA, and serves as an adviser to the students.

“He’s a really good resource for us,” Parr said. “If we have questions about production, he’s there for us. If we need actors, he helps us out.”

Mansur is currently working on a documentary on Gordon Smith, who owns the largest private collection of Plains Indian art and artifacts in the world. A portion of the documentary is already showing at the Houston Museum of Natural Science, but Mansur said he is trying to get funding to tell more of Smith’s story.