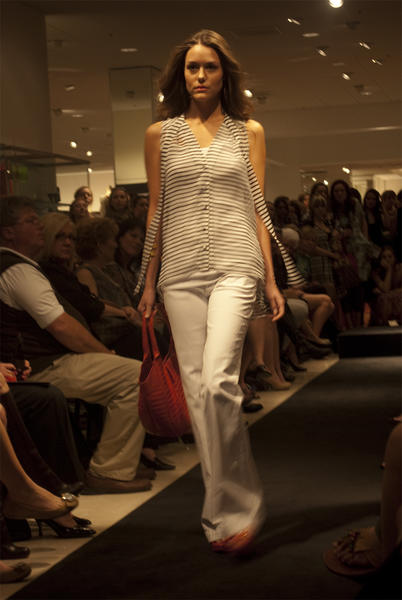 Imagine Neiman Marcus as a giant closet. The assignment: to style your very own fashion show for one of the brand’s most anticipated events. Doesn’t sound like your typical course curriculum. But that’s exactly what it was for students in the promotions principles class of the fashion merchandising program.

Some 400 guests eagerly sat and stood around a runway in the Neiman Marcus store at Ridgmar Mall to get a glimpse of the result of eight weeks of dedication and hard work.

While students organized looks backstage, the first notes of an energetic soundtrack emerged and the first model stepped out on the runway, dressed in an elegant summer outfit.

It all began in December of 2010 when Marjon Zabihi and Aaron Wolfe, public relations representatives at Neiman Marcus, were looking for an innovative idea to celebrate the annual kick-off Neiman Marcus Fashion Rules Party.

Wolfe, a 2009 TCU graduate, contacted his friends in the fashion merchandising program and proposed a unique collaboration.

The students were challenged with an usual and exciting course project: to style 32 runway looks from clothes to accessories, select models and music and design visual displays for in-store windows and mannequin statements.

Claire VanBeber, a sophomore fashion merchandising major who participated in the event, said it is a lot harder than it looks. The 36 students in the class were divided into four teams. They designed storyboards that represented their creative vision, taking inspiration from spring 2011 trends selected by Neiman Marcus’ fashion director Ken Downing, such as the all-white wardrobe, the white pant and some bohemian influences.

Some team members were responsible for running a casting call to choose their models from the Kim Dawson and Campbell agencies, basing their decisions on the walk and personality of the models. Others collaborated with Christina Foley, Neiman Marcus visual manager, to conceptualize and create both window displays and mannequin presentations throughout the store.

Students used visual merchandising skills they learned in class. Patricia Warrington, associate professor of merchandising and textiles ,said fashion merchandising is a demanding field where the goal is to emphasize the merchandise by creating a compelling story that encourages customers to stop and take a look.

When it came to the runway, students brainstormed and voted on themes in their individual teams such as “Boulevard de la Croisette’ and “the Secret Garden.’

Coached by Zabihi and Wolfe, students used individual styling techniques to pull clothing, shoes, and accessories from all departments.

Picking the strongest looks was crucial, as teams would eventually compete in the final show. Students had to reflect Neiman Marcus standards and trends while taking high-fashion to reality by targeting looks to Fort Worth customers, who seek a classic, ladylike allure.

VanBeber said shopping without prices and being part of the Neiman’s team were fun aspects of the project. However, students were also met by challenges. When an evening dress was a beautiful avant-garde gown to one group member, it was a grandma’s rug to another.

Sarah Wofford, a sophomore fashion merchandising major, said its all part of the way fashion works.

“You can’t take things personally,” Wofford said. “When nine different people come up with different ideas and styles, you have to compromise; you neutralize the situation and regroup.”

Warrington said students had the added pressure of facing the uncertainty of such a new and unique project. There was no set structure and students had to prioritize their

responsibilities while learning to be flexible and patient with each other.

“I’ve been so impressed with the students’ enthusiasm, their commitment to the project, and their professionalism,” Warrington said. “This was a perfect project for this group of students who are very mature and willing to put in the hard work.”

Warrington said the project was mutually beneficial. The students learned marketable skills through hands-on experience very similar to what they will encounter in the fashion industry.

“It’s exciting to collaborate in this way and to have the opportunity to partner with the community at large,” she said. “This particular project allowed the students to work with industry professionals that have years of experience and extremely high standards.”

There were also benefits for Neiman Marcus, Zabihi said. For her personally it kept every day fresh and exciting.

“There is nothing quite like the drive to learn that you have as a college student,” she said. “They did such an amazing job of taking every step of this process personally as well as seeing it as a building block to their future.” she said.

To broaden the reach of Neiman Marcus’ promotion for the event, students set up Facebook events and invited family and friends.

The night of the party, guests enjoyed bites, beverages and a DJ while they watched the fashion show and enjoyed shopping in the festive atmosphere of the store.

While some students were backstage assisting models to quickly change outfits for their next walk down the catwalk, others publicly presented the carefully-crafted fashion boards that explained the inspiration behind their chosen looks.

TCU’s battle on the runway was judged by fashion editors from Indulge, 360 West and Fort Worth, Texas magazine. Team Regatta won the judges vote, and Gold Dust won the people’s choice award.

Wofford said it was something she would never forget.

“My most memorable moment was watching our last look, the all-white look with turquoise Christian Louboutin shoes and white hat, hit the runway and everyone gasped,” she said. “After the event, I was so happy and proud of everyone.

I was mostly thankful though. It’s not everyday that nineteen and twenty-year-old girls have the privilege of styling a fashion show for Neiman Marcus.”