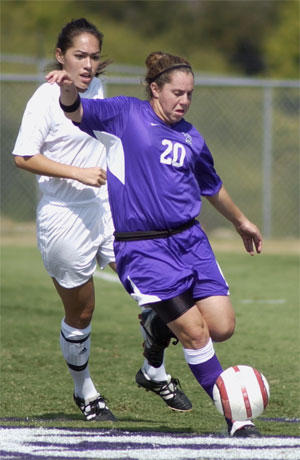 Saturday’s game at New Mexico is the start of a new season for TCU’s soccer team, a senior midfielder said.”We are going to be trying some new things,” Moran Lavi said. “We also want to do well before we go to the conference tournament.”

Caroline Starns, a freshman midfielder, said the team will try to press more offensively and attack.

Lavi said the team wants to pressure on defense as well.

Head coach Dan Abdalla said the team has to go out and compete this weekend.

“We need to improve our overall intensity level,” Abdalla said. “We have to be more willing to take chances.”

Abdalla also said the team must improve its play at midfield and be more organized.

Lavi said she did not know much about New Mexico.

“We are going to try and concentrate on ourselves,” Lavi said. “We just have to play to our abilities and strengths.”

Abdalla said New Mexico will be a tough team to play.

“New Mexico has several exceptional players,” Abdalla said. “We are going to have to match their intensity.”

There is a lot of pressure on Starns to play well, Abdalla said, even though she is a freshman. He said he will be moving players around this weekend to the positions they will play in the conference tournament, which begins Wednesday in Las Vegas.

Starns said the team has gone through some intense practices leading up to this weekend.

“We have been playing in game-like situations before the game,” Starns said.

Abdalla said the team prepares the same way before every game.

For Lavi, this will be her last regular season conference game. She said she knows what it takes to win this weekend and in next week’s conference tournament.

“I played in Conference USA, and the teams in the Mountain West are more physical and more intense,” Lavi said. “There is no easy game.”

For Starns, the game against New Mexico will be her last regular season game as a freshman.

“College soccer players are 10 times faster and 10 times stronger than they were in high school,” Starns said.

Abdalla said that although the players will do some things this weekend for the long term of the team, the game comes down to winning.

“It is single elimination from here on out,” Abdalla said.