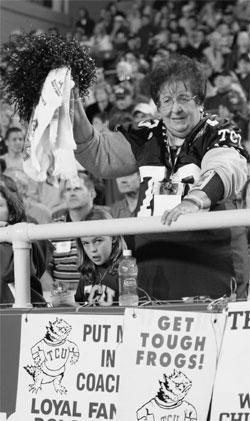 The sign under the No. 73 jersey reads “Put me in coach.”But the person in the jersey has never played a single down at Amon Carter Stadium. She’s been to her fair share of games, though, about 30 years worth.

The No. 73 jersey belongs to longtime fan Dolores Oelfke.

Oelfke, who retired from TCU’s financial aid office in the late 1990s, rarely misses a chance to watch TCU in action.

Whether it’s football, basketball or baseball – Oelfke’s there.

She doesn’t just sit idly, though. She makes her presence known.

“If more people would go to sporting events and scream and holler and get rid of their stress, we wouldn’t have such big problems in the world,” Oelfke said. “And, it helps the team.”

Like during a baseball game last year on Mother’s Day when she yelled, “Your mother wants a home run for Mother’s Day,” as senior Chad Huffman stepped up to bat.

Huffman hit a home run all right, and his mother wasn’t the only one smiling.

Oelfke was grinning from ear to ear.

” It’s just me and the team,” Oelfke said. “I don’t hear anybody else. I’m just concentrating on the game.”

Kaye Derrick, who worked with Oelfke in the financial aid office, said she’s one of the most school-spirited employees she has seen.

Head football coach Gary Patterson said Oelfke is hard to overlook because of her passion and enthusiasm.

“She’s at Frog Club, she’s at my radio show – anytime there’s something going on, Dolores is there,” he said.

Cheering on the team outside of a game setting isn’t anything new to Oelfke, though.

She remembers rushing to Meacham Airport about 20 years ago to welcome the team and then-head coach Jim Wacker back to Fort Worth after watching them play on television.

“We jumped in the car, and we were out there screaming at them when they got off the plane,” she said.

A photographer from the Fort Worth Star-Telegram snapped a photo of her that day, and she made the newspaper’s front page.

The other photos are autographed prints of former athletes ranging from Roger Williams, now Texas secretary of state, to alumnus LaDainian Tomlinson, who plays for the San Diego Chargers.

The collection used to fill her Sadler Hall office.

“They had to get an 18-wheeler when I left for all the memorabilia I had,” Oelfke joked.

There were also helmets and autographed footballs, basketballs and baseballs and a massive collection of Horned Frogs.

As she moved from office to office over her 25-year career as the student employment coordinator in the financial aid department, the collection always followed.

Some of her collection, though, consists of much smaller things. Like the lucky purple bracelet she got from former quarterback Tye Gunn at the beginning of the 2005 football season. She wore the good luck charm all the way to the EV1.net Houston Bowl.

At the bowl game, Oelfke, along with her husband, two daughters and two grandchildren, sat in the front row wearing TCU jerseys.

Oelfke said she never misses a chance to get her family excited about TCU.

When her 5-year-old grandson told her he wanted to be a pilot after watching an air show last year, she responded, “You’re not going to be a pilot until you finish playing football for TCU.”

Oelfke and her husband, Lyle, graduated from the University of Houston in the 1950s, but her daughters are TCU alumnae.

You’re more likely to see her in TCU purple than the University of Houston’s red, though.

“The woman’s closet is filled with purple,” said her daughter, Gina Oelfke. “That’s about all we buy her anymore.”

Gina Oelfke said her mother’s enthusiasm can sometimes be contagious.

“She gets excited, and then it rubs off on us, too,” she said.

Oelfke said her mother gets a lot of joy from attending TCU sporting events, and she doesn’t see an end in sight for Dolores Oelfke’s role as “superfan.”

Dolores Oelfke said they couldn’t keep her away if they tried.