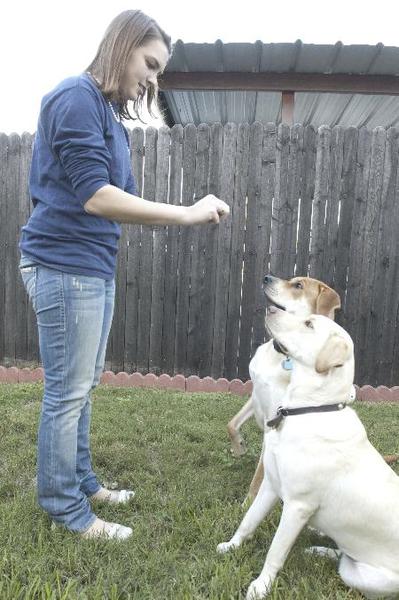 Introducing a pet into a home has its benefits, but choosing the right pet and training your pet can be difficult for college students.

Senior Andrea Dean had always been an animal lover, but when two friends gave her a yellow lab puppy last year she realized how important proper animal training could be, especially while sharing her time and space with two other roommates. Dean said she quickly realized instilling good manners in her dog, Lili, from an early age would be the key to a happy and comfortable life in her duplex near campus.

“That’s when the training really came in because if I hadn’t had her potty trained or house broken, it would make that small space feel even smaller than it actually is,” Dean said. “Behavior is a big issue when it comes to that.”

The bigger Lili got, the smaller the house seemed to feel, Dean said. Size was not the only challenge she faced when living with the large-breed dog. Dean said the idea of introducing Lili into a pack and interacting with other dogs was also critical in raising a well-behaved pet.

“Actually, when she was just a puppy (she) was kind of teething … and biting people’s hands and stuff, so we took her to my parents house,” Dean said. “I have a lab who’s three years old and her maternal instincts came out and taught (Lili) not to bite because we couldn’t express to her that it hurt. She learned very quickly that biting is a no-no because it hurts.”

Dean said the good behavior Lili learned from being around older, more dominant dogs was just one of the blessings of having a pack setting to turn to.

“Socialization from an early age is important, especially for dogs, because they do like to learn from watching others,” Dean said.

Charles Buxton, general manager of a local PETCO store, said there is a lot of information to consider when choosing a pet, but college students need to think carefully about how a pet would fit into their daily routine.

“I think a lot depends on your lifestyle, how active a person you are and how many outside activities you would have,” Buxton said. “(For) somebody who’s jogging regularly, a dog might be a great pet.”

Nocturnal animals, like hamsters, might not make the best companion for a student who values their sleep, Buxton said. Cats and betta fish were at the top of his list of recommendations for young people looking to add a pet to their home.

“Fish are good pets, but they’re more difficult to move if you’re going home for the holidays or something,” Buxton said. “They’re great animals and it’s kind of neat, especially in an apartment setting, because it’s kind of a mixture of art and science.”

Dean said no matter what animal you choose to take home, your skills as a trainer and pack leader will help mold the behavior and personality of your pet. As an advocate of pet rescues, Dean said she recommends going to an animal shelter and seeing if any of the animals there might be right for you. For those wary of formerly homeless or mistreated animals, Dean offered some advice.

“Half of the behavior comes from who they are and half of it is how you train them and how you bring them up,” Dean said. “They definitely look to you for guidance because they need a pack leader.”

Saying Goodbye to a Pet

After spending years watching an animal grow and learn, it is only natural to feel attached to a pet like you would to another person, Cathy Cox, assistant professor of psychology, said. Pets can be just as good at satisfying our attachment needs as people are, she said.

“You can see a lot of the attachment behaviors that we do (as humans),” Cox said. “We turn towards our pet, we want to be around our pet for support and we want to get that love and unconditional acceptance.”

For many freshmen, moving away to school was an exciting experience, but one that came with its share of downsides, Cox said.

“When moving away to college many people become upset at being separated from their pets,” Cox wrote in an e-mail. “When we’re upset, it activates the attachment behavioral system (and) we seek out relationships in order to get security.”

The same amount of anxiety that comes with leaving a pet behind is often experienced by owners who lose an animal, Cox said. The effects of the passing of a beloved pet can be devastating for a person.

Knowing that all animals’ lives do eventually come to an end, David Stafford, owner of Bluebonnet Pet Cemetery, said his business aims to provide owners with a special place to remember a deceased pet.

The cemetery, which is located in Mansfield, is open from 8 a.m. to 8 p.m., seven days a week for personal visitation and memorial services.

For pet parents like Dean, the loss of a pet would leave an imprint, or paw print in some cases, on their daily lives.

“They become such a part of your family,” Dean said. “If I were to come home and not have her greet me at the door with her tail wagging . it’d be a sad day – it would not be the same.”