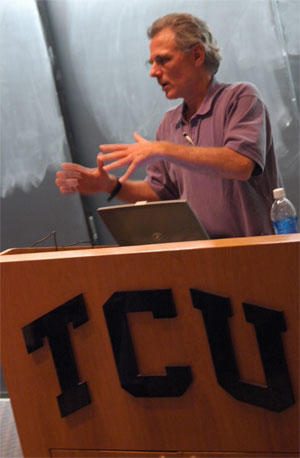 A National Geographic explorer said Monday that students need to start thinking seriously about the next 100 years because that is what they are going to inherit.J. Michael Fay, a scientist and conservationist, spent more than 600 hours flying over about 27 African countries to document the human impact on the region. He shared with the TCU community the best of 110,000 photographs he took on the trip, when he spoke in Winston-Scott Hall.

Fay gave an example of the importance of the human “footprint” when he described Mozambique. He said the general belief about the country is that it has been torn apart by years of war and gone “to hell in a handbasket.” However, he said, the country is a lot better off than most because it is not overpopulated, fertile and has not been extensively damaged by humans.

“If you look at the (human) footprint perspective, these guys are rich,” Fay said. “If you ever want to settle down in a place in Africa, Mozambique is the place.”

He said his flight ended in January 2005 but has gone back several times for more research and will go again in March.

“If I haven’t lost my girlfriend yet, I just might this year,” Fay said.

He said he has been working to get attention for the results of his research.

“We need to think about our impact on the planet; conservation is a good start,” he said.

He encouraged TCU students to conserve as much as possible, by doing things such as getting to campus on bicycles instead of cars.

John Breyer, a professor of geology, said he encouraged his students to attend the speech.

“We study the impact of humans on the earth, and (Fay’s research) is a way to see it,” Breyer said.

Kenny Befus, a geology graduate student, said he was impressed by how much impact Fay had on Africa since his trip.

“I used to think people didn’t care (about Africa’s ecosystem),” he said.

He said it was really interesting to know what kind of preservation programs were already in place and in planning in Africa.

Fay will speak again at 7 p.m. today in the Student Center Ballroom.