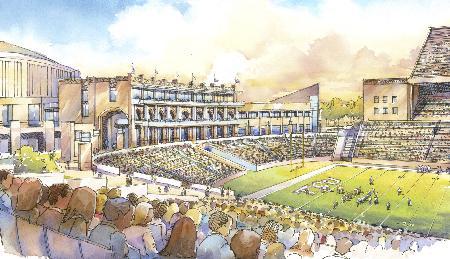 More online: Read about the construction at Amon Carter in the Skiff archives

A new seating section being constructed at Amon Carter Stadium collapsed at about 1:30 a.m. Friday.

No injuries were reported, said Lisa Albert, a university spokeswoman. Part of the west side of the new structure fell onto the south end zone seating, spilling debris down to the first rows of seats.

"Structural engineers and the general contractor involved in the project are conducting a thorough and comprehensive investigation to determine the cause," Albert wrote in an e-mail to students, faculty and staff Friday.

Albert said it is too early to tell whether Austin Commercial, Inc. is at fault for the complex's collapse.

She said the university will also hire independent engineers to investigate the incident.

The collapse was caught on camera by a surveillance camera, a worker at the site said. The university is not releasing the video because it is part of the investigation, said TCU Police Chief Steve McGee.

Austin Commercial is the construction company for the Athletics Complex but is also in charge of several projects on campus including the four new residence halls and the renovation of Jarvis Dormitory.

The company has also overseen projects at the University of North Texas, including UNT's new athletic complex in 2005.

Construction at Amon Carter was part of a renovation effort that will include six suites, 250 club seats, a larger academic area for student-athletes and a team meeting room and hospitality area.

Construction delays are unknown at this time.

Check back for details.