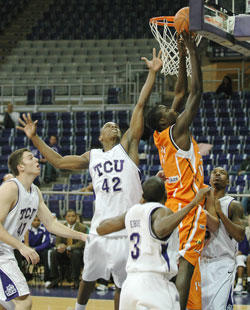 Even with less than three minutes remaining and his team up by 66 points, Neil Dougherty was instructing his players as if it were a conference game in early March instead of an exhibition game in early November.This kind of performance was what familiar faces and newcomers alike wanted for the men’s basketball team – a 118-54 exhibition win against LCC International University on Tuesday.

After leading by only five points midway through the first half, the Horned Frogs would roll and outscore LCC from that point on, 98-39.

Turnovers were the story of the night for LCC as the team from Klaipeda, Lithuania was crippled by bad passing and numerous traveling calls. For most of the game the LCC team had more turnovers than points. The team finished with 47 turnovers.

Senior guard Brent Hackett led the way in the exhibition with 22 points on 8-of-16 shooting and 5-of-11 from beyond the arc.

LCC pulled within five points in the first half, but from that point on, the game got out of hand in a hurry. The Horned Frogs headed to the locker room with a 55-23 lead after ending the first half on a 35-8 run in a span of less than 10 minutes.

Hackett poured in 11 points in about a two-minute stretch – a stretch that included three 3-point buckets and a buzzer-beater to put Dougherty’s club up by 32 points at the half.

Dougherty said Hackett’s performance represents how far he has matured as a player.

“We’ve got to try to get him as many touches as we can,” Dougherty said.

Not to be outdone was junior guard Henry Salter, who saw his first time with the club and made an impact on the offensive end with 15 points.

Hackett said with Salter’s offensive talents in the mix, he will stretch opposing defenses.

“When he’s knocking down shots like he was today, then it’s going to make it easier for the post and the opposite wing,” Hackett said.