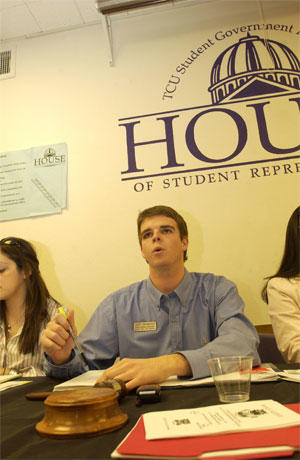 A new Speaker of the House was named Tuesday for the Student Government Association at the first official House of Student Representatives meeting of the semester. John Campbell, a junior political science major, resigned from the position two weeks ago for personal reasons before ever serving at a meeting, Vice President Jace Thompson said.

Thomas Pressly, a freshman political science major, was elected 18-4 to fill Campbell’s position as Speaker of the House after submitting an application and answering questions in front of the House.

“I have the ability to listen, speak clearly and be open-minded in all matters regarding SGA,” Pressly said.

While members of the House questioned Pressly and his ability to serve in this leadership position as a freshman, Thompson supported Pressly’s candidacy.

Pressly answered speculations with confidence and said, “I do have the time to put into it, I don’t know exactly what to do in all matters, but I’m a quick learner.”

He said his main goals as Speaker of the House include increasing retention in the House and making meetings run more efficiently.

“I think if our meetings run smoother, people will stay,” Pressly said.

He also plans to submit opinion columns to the Skiff twice a month because he said SGA has done “some really great things and I think students need to hear about them.”

Applications are now being accepted to fill 26 other empty positions in the House including six representative positions for the College of Science and Engineering and two for the class of 2009.

Tori Hutchens, chairwoman of the Elections and Regulations Committee, said the large number of openings “is unfortunate in some ways, but if people aren’t coming in then this gives other students opportunities to participate.”

Normally, representatives run in April and serve throughout the next year, but this election will be used to fill the House for the current semester.

Hutchens said she is not expecting a large turnout of voters but that she hopes the positions will all be filled.

“There’s a lot of open seats and not too many people applying, so this would be an easy time to get involved,” Hutchens said.

A bill presented by Sebastian Moleski, a senior economics major, was passed that allows justices to voice their opinions on issues that have already passed and says that justices who make decisions based on the Constitution will not be held personally accountable.

Moleski said the bill is necessary because of “allegations that justices were held personally responsible for their interpretations.”

He said the bill also gives justices the chance to articulate their opinions after an issue has been ruled on because sometimes there is disagreement about a decision.

Thompson, who ran the meeting until Pressly was elected, welcomed all members to the House and said they can “trust the leadership that was elected by the student body because we aim to do good things.