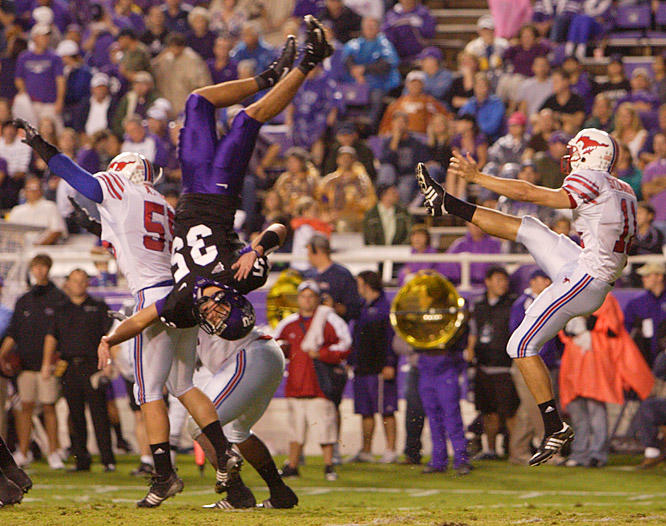 FORTWORTH, Texas — The football team has had a tradition of families playing for the purple and white, from the Renfros to the Schobels. Brothers Logan and Tanner Brock are adding another family to the list.

Tanner saw extensive action at linebacker last season as a true freshman. He racked up 32 tackles and led the team with 14 special team tackles. He also made national headlines with a helmet-less block against Southern Methodist University that resulted in punt return touchdown and a No. 1 spot on ESPN’s plays of the week.

Logan started three games at tight end and played in 12 games overall. He led all tight ends on the team with five receptions for 67 yards.

Both are trying to secure a starting spot for the upcoming season. Tanner likely will start at one of the linebacker spots in the 4-2-5 defense this fall, and Logan is still competing with others for the top spot at tight end on the depth chart.

A little brotherly competition happens between the two, whether it’s improving in football or seeing who can eat the most food.

“Whether if it’s who can eat the fastest, who can drink the bottle of water fastest in the car, we’re always competing over something,” Tanner said.

“Between us there’s always a competition with the pride aspect of it,” Logan said.

The brothers said the competition that starts on the field doesn’t stop there.

“It definitely gets taken home,” Tanner said. “If he beats me on a route he’s going to tell me about. If I beat him in some other drill he’ll hear about.”

Logan said he and his brother are always talking about it.

“We have drills and one-on-one stuff, and we get to go against each other,” Logan said. “We’re always talking about after practice and before.”

Sometimes brothers on the same team play on the same side of the ball, like the Rodgers brothers on offense at Oregon State. The Brocks said they play on different sides because of mentality and experience.

“I’ve never played on defense my whole life,” Logan said. “I’ve always been on offense and grew to love that. With (Tanner), our dad was a big time linebacker in college football, and I think he started to enjoy that side of the ball and follow in our dad’s footsteps.”

Tanner said his mentality and mindset made him a linebacker.

“Football is a lot about mentality” he said. “I’ve always had the mentality to see the ball and get it. Logan’s mentality has always been to (get) the ball, and when he gets it he’s going to do big things with it.”

Through all the differences and competition they’re still family. They said they have each other’s backs and someone to fall back on and trust.

“There’s a big trust aspect of it (having a brother on the same team),” Logan said. “Someone that you can trust on the team, someone you can relate to and brought up the same as you were. That’s a big deal.”