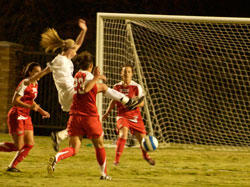 The long and winding road known as the 2007 season has come to an end for the soccer team.A 2-0 loss to the Brigham Young Cougars in the first round of the Mountain West Conference Tournament on Wednesday closed out the 2007 campaign for the soccer team. The loss brought the team to 8-11 on the season and served as the swan song for four seniors.

Freshman goalkeeper Kelsey Walters would match BYU’s Erika Woodbury save for save and kept the match scoreless until BYU’s leading scorer broke the tie in the 65th minute. A goal off the head of junior forward Katie Larkin gave the Cougars a one-goal lead almost midway through the second half.

Head coach Dan Abdalla said the slow and deliberate styles of play for both teams affected how TCU wanted the game to play out. The Horned Frog’s play on offense was unable to take any pressure off its defense, he said.

“Offensively, we were not quite as sharp as we needed to be,” he said.

The Cougars proved to be too much for Abdalla’s team Tuesday, being outshot, 28-9, while TCU would commit nearly twice as many fouls at a 17-9 clip during the course of the 90-minute match.

Though he was happy with how the team responded coming out of the locker room in the second half, Abdalla said, the lack of scoring punch was the result of the team failing to convert possible scoring chances.

“We didn’t take advantage of the opportunities we had,” he said.

Woodbury would complete the shutout for BYU, stopping four TCU shots on goal in the process.

Any attempt at a last-minute gasp by the Horned Frogs, who only suited up 18 players for Wednesday’s match, was thwarted by a goal off the foot of senior midfielder Carolyn Swenson in the 88th minute – effectively ending the 2007 season.

He said though the team needs to raise its confidence level as well as sharpen its play on the offensive side of the ball, Abdalla said he is ecstatic about his club for next season and beyond.

“We are excited about the future and the direction of the program,” he said.

For Your Info
Final season stats