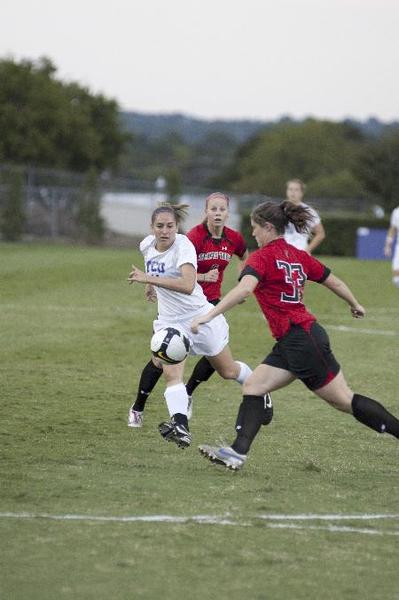 Mountain West Conference play will start Saturday for the women’s soccer team when they will head to New Mexico to take on the Lobos.

New Mexico, 8-1-2, suffered its first loss of the season last weekend to Northern Arizona. Horned Frogs head coach Dan Abdalla said the Lobos are one of the teams to beat in the MWC.

“They’re a hard working, very disciplined team; they defend great,” Abdalla said. “You always know whenever you play them you’re going to be in for a great battle.”

Abdalla said the team would need to buckle down during conference play.

“It’s been about making sure that we pay attention to the little details on everything,” Abdalla said. “Anytime you get into conference play, it really comes down to who’s sharper in both boxes, so we got to make sure that we’re paying attention to those things.”

Saturday’s match could be high scoring as the Frogs and the Lobos rank first and second among MWC teams with 2.18 and 1.91 goals per game, respectively. Individually, sophomore forward Jennifer Williams leads New Mexico on offense with eight goals and five assists for 21 points.

The high scores in the two games could be attributed to the team’s switch to a set that featured four defenders, four midfielders and two forwards. Abdalla said the team would still use both a 4-4-2 and 4-5-1, a set in which a midfielder is substituted for one of the forwards.

Injuries have plagued the team in the first half of the season, but Abdalla said a couple key players would be back in the mix on Saturday.

Abdalla said sophomore midfieder Chelsey Wilgenburg would return against Lobos and junior defender/midfielder Cheryl Martin would be available to play a full 90-minute game for the first time since the end of the 2008 season. Sophomore defender/midfielder Lindsay Holmes status is questionable.