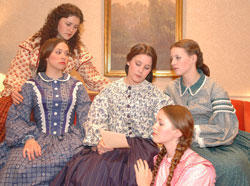 Who knew the characters of “Little Women” could sing? “Little Women”, the novel, became a Broadway musical in New York and will be performed on campus.TCU is one of the first universities to take on the production, the directors said. This will be the first time “Little Women” is performed in Fort Worth, according to a Nov. 12 press release from the Office of Communications.

The musical will be performed in the Buschman Theatre in Ed Landreth Hall from Nov. 27 to Dec. 2. Twenty undergraduate students comprise the cast and an orchestra of professional musicians picked by the department will provide accompanying music. The story is about four sisters growing up during the Civil War.

Alan Shorter, the music director of the production and a theatre associate professor, said the story deals with family, love and loss.

“This is a story every generation has embraced,” Shorter said. “It’s a journey of where we go with our life.”

Shorter said there have been so many film versions that it was natural the story would eventually become a musical.

Harry Parker, the director of the play and chairman of the theater department, said “Little Women” was on Broadway about three years and only showed for about six months. Parker said it is a classic American novel that shows the strength and comfort of family during changing times.

Shorter said this story is not just for women but for everyone. He said some parts of the show are funny and moving.

Shorter said this story is educational for students because the novel is historical and set in the 1860s.

Eric Dobbins, a junior musical theater major and actor in the musical, said it was interesting from a male’s perspective to see the female characters be different from the normal gender roles during that time period.

Justin Rapp, a freshman theater major, said this will be his second time performing “Little Women.” He said the women in the play have many layers, but the men also have pretty developed roles.

“There’s not that much difference between the characters because these are real people and real life stories, which comes through all of the characters,” Rapp said.

Laura Campbell, a junior musical theater major, said she is learning and experiencing a lot working on this production. She will play the role of Amy, the youngest of the four sisters.

She said it was a learning experience for her because she is the oldest child in her family, but the youngest in the musical.