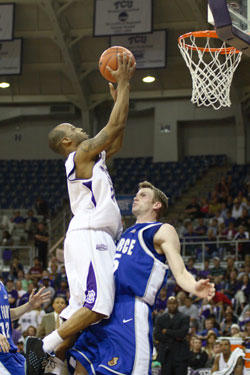 As the final seconds expired off the clock in Saturday’s 71-66 upset victory against the Air Force Falcons, reality began to set in for the men’s basketball team and its fans: good things come to those who are patient. Not only did the Horned Frogs (11-15, 3-11 in conference) pull out a win against the No. 13 team in the country, but they also put an end to their abysmal 11-game losing streak in the process.

Even with the Frogs shooting 75 percent from the field in the second half and being able to create 24 points off Falcon turnovers, getting a career night from junior guard Ryan Wall didn’t hurt TCU’s cause. Wall finished with 19 points on 4 of 5 shooting from three-point land off the bench, and he did this despite battling sickness and ankle problems. Wall said the time off the coaching staff gave him allowed him to charge his battery and play to his potential.

Head coach Neil Dougherty said Wall’s play was huge, and allowed him to play him and senior guard Neil P. Dougherty at the same time to limit turnovers, maintain solid ball-handling in the backcourt and to take some time off the clock in the game’s final minutes. He also said the play of senior center Femi Ibikunle, who came off the bench and scored nine points while providing toughness, was no surprise to him as Ibikunle’s productivity has risen in recent games. Like Wall, Ibikunle was also battling injuries, coach Dougherty said.

“One of these days, the cloud of injuries is going to leave this place,” coach Dougherty said.

The first half ended with the Horned Frogs taking a 25-24 lead into the locker room. Despite only shooting one for seven from the three-point line, the Frogs found themselves leading at one point by as much as 11 in the first half.

In the second half, the Frogs switched to a full-court, man-to-man press on defense that resulted in a couple of easy buckets to start the half. A momentum-changing three pointer by junior guard Brent Hackett and a thunderous one-handed jam by junior forward Alvardo Parker brought Frog fans to their feet in excitement, and left Falcons coach Jeff Bzdelik and Air Force players and fans with more questions than answers.

Ending the losing streak against one of the nation’s best was special for the team, sophomore forward Kevin Langford said.

“When you’re playing Air Force, if you have an opportunity, you have to execute,” Langford said.

Langford said the word “sustain,” which head coach Neil Dougherty was preaching to his team during this past week’s practice, was appropriate for a team that had come so close to winning several of the games during their 11-game skid.

“It shows us that those last 11 games we lost, we really should have won, and could have won,” Langford said.

Coach Dougherty said the team was trying to be patient on the offense, and wanted to attack only when necessary, which resulted in shooting better than 55 percent for the game. On defense, the Frogs stifled the Falcons, holding them to under 40 percent shooting. This effort was highlighted by the four-point, 0 for 6 field-goal shooting performance of Air Force’s leading scorer, Dan Nwaele.

“They make you do different things,” said coach Dougherty of Air Force’s offense. “If you sit there and guard that motion (offense) for the entire shot clock, you’re just asking for trouble.”

A jubilant coach Dougherty had a simple answer for what was the difference between Saturday’s game and last month’s game, which saw the Falcons dominate, 72-39.

“The difference is about 36 points,” coach Dougherty said.