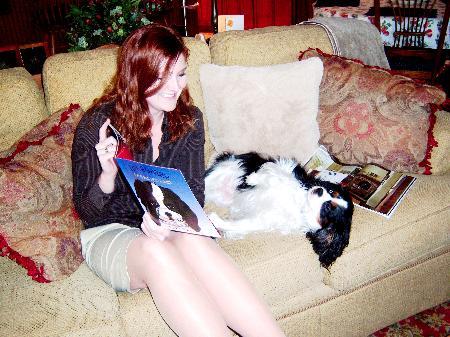 Katie-Rose Watson didn’t set out to write a children’s book. She was planning on writing a poem about pain for her creative writing class.

“My first ever assignment was a chick-lit piece, and it got just torn apart in class,” she said. “So I thought, ‘OK, I’m going to write this really dark and edgy ode; it’s going to be an ode to pain.'”

But when the sophomore German major sat down to work on her assignment, she realized she wasn’t in the right frame of mind for that kind of writing, especially after Gabby, her Cavalier King Charles Spaniel, came to cuddle with her.

“I had just had a hair appointment; my toenails were drying and my puppy jumped in my lap, and I was trying to write this ode to pain,” Watson said. “I ended up writing this really whimsical, Dr. Seuss-y rhyme about her.”

Apparently, Watson wasn’t the only one to see the similarities. Her creative writing professor, Cynthia Shearer, said she thought Watson’s poem could easily be turned into a book.

“I was afraid that the other people in the class were going to not take seriously her stuff, because it was funny, and because it was about a dog,” Shearer said. “When I could see the commercial possibilities of this little throw-away poem, because that’s what children’s books are, I meant it as a compliment. It never occurred to me that she would actually pursue it.”

Watson, however, wasted no time in getting down to business. By the end of the semester, she had written several more poems about her dog. This time, she tried to incorporate a storyline into her work.

“We both kind of decided that it would be better to do an actual story first,” Watson said.

The result was “Little Gabby Meets Her New Family,” which introduces readers to Little Gabby, a Cavalier puppy based on Watson’s own dog, and her owner Mel, who is based on Watson as a 9-year-old. The book became available on Amazon, Target and Barnes and Noble Web sites in early November.

Shearer told Watson that she should look into self-publishing instead of submitting her book to a more established third party publisher, where it might take several years for someone to notice its potential, Watson said.

“Since it’s a children’s book, she thought it would be really easy to market,” Watson said. “It’s very easy to go around to Barnes & Noble and say, ‘Hey, do you want to flip through this, and see if it’s maybe something you want to have on your shelves?'”

In self-publishing, authors pay all of their book’s production costs. In return, they retain ownership of their work and keep all of the profits.

After some research, Watson decided to publish her book through AuthorHouse, the self-publishing company that first published “Legally Blonde.”

Watson’s father paid for her story to be printed and professionally illustrated, she said. The two will split proceeds from the book until he has been completely reimbursed for the production costs. After that, Watson said, all of the money will go to her.

Watson said she hopes her book will sell enough copies to attract the attention of a large third-party publisher like Scholastic.

In the meantime, she’s putting all her time and energy into marketing her new book. She started her own Web site – www.littlegabbybooks.com – and the marketing consultant from AuthorHouse sent a news release to media outlets in 100 different cities, Watson said.

Watson said she thinks her sales will benefit from the enthusiasm of other Cavalier owners. She contacted several Cavalier fan clubs around the country and hopes to do a book signing at the Eukanuba Natonal Championship dog show. Some of the people who buy her book don’t even have children, she said.

“That’s how Cavalier people are; they just want it for their coffee table,” Watson said.

It’s a market other children’s authors haven’t tapped into, she said.

Shearer said she has been impressed with Watson’s business skills. They’ll set Watson apart from some other writers, she said.

Shearer said she invited Watson to come in and read her book to some of her new creative writing students. After Watson left, one of the students asked Shearer if she believed that some people were “born writers.”

“Yes, I believe some people are born writers,” Shearer said. “But I’ve seen a lot of born writers never do anything with it. Somebody like Kate is going to succeed because she’s persistent – because she doesn’t give up. She’ll be financing her literary career when other ‘born writers’ are going to be working at McDonald’s.”

For Watson, the book is just the beginning.

“My goal in life now, my total dream, is that no little girl wants to go to sleep without her Little Gabby stuffed animal,” she said. “I really want this to be kind of the next ‘Madeleine,’ but bigger. I would really like to see the lunch boxes, some sheets – the whole empire.”