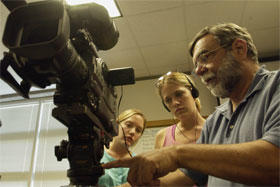 Behind the scenes of TCU News Now, a reporter lugs one of four bulky cameras across campus. Another student, after setting up an interview, arrives at the office to find the last available camera is out of order. Students wait in line at all hours of the night at one of the three editing systems, while those on the computers rush to finish up their stories to ease the congestion.Despite these conditions described by last year’s TCU News Now staff, the program proved to be award-winning.

TCU News Now was chosen from 3,100 entries as the 2004 national first place for a Television Non-Daily Newscast by the Society of Professional Journalists.

A staff of 12 students produced the show with four Sony cameras and three editing systems during its first semester, said John Miller, professional in residence in broadcast journalism and director of Student TV Media.

Senior broadcast journalism and musical theater major Robyn Kriel said she appreciated the resources provided, but there was room for improvement.

“We were very blessed with the equipment that we had,” Kriel said, “but there was definitely a shortage of it.”

Tommy Thomason, director of the Schieffer School of Journalism, said TCU is committed to getting the resources required for the type of “TCU News Now” that it needs.

“It’s not a question of if, but when,” Thomason said.

“We began three years ago with one camera and one person behind a desk with a black curtain,” she said.

The original staff was less than 10 students, Houston said. The show now has 59 staff members and a daily weather forecast.

The SMU Daily Update has a studio with three cameras, lights, a set, a Teleprompter and 26 mini DV field cameras, Houston said.

Miller recognized that many schools have better equipment than TCU News Now, but he said it is because TCU’s broadcast is brand new.

Broadcast journalism and political science major Liddy Serio said that although the equipment was acceptable, she hopes TCU will expand the staff’s resources.

“Our staff did phenomenal with the equipment we had,” she said, “but, hopefully, with the attention we gained from winning the award, there will be more funding for more equipment.”

Both Serio and Kriel said more editing stations would relieve some of the pressures to edit stories quickly, which, in turn, would help the staff to produce a more polished final product.

Miller said that as the program builds, and as more students become involved and win awards, TCU News Now will receive more and better equipment.

Thomason said there will be plans to build a new student media center in the next few years: a “cutting edge, state-of-the-art” converged workspace for the Skiff and TCU News Now.

In the meantime, Miller said, the two new computers TCU News Now received will help the staff meet its goal of one show every week of class this semester starting Sept. 5.