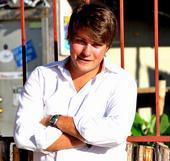 Senior entrepreneurial management major Rob Baird is expecting friendly faces and favorable weather tonight as he headlines on the patio at 8.0.

Baird said he has been writing and performing his original Texas country songs since his freshman year at TCU and has a growing repertoire of original songs with a few cover songs mixed in. He released an album in late 2006 and is currently recording for a promotional CD.

Baird is also working to find a road band of musicians that he connects with, manager Matthew Layton said.

“Rob is a captivating individual,” Layton said. “People meet him once and they want to be wherever he is.”

Baird said he is excited to be the lead act for the first time at 8.0.

“It should be a beautiful night out on the patio, and we are hoping to see some familiar faces from TCU,” Baird said.

There is a $5 cover, and guests must be 21 or older to attend. The show will begin at 9:30 p.m. Opening for Baird tonight is Telegraph Canyon, another local band.