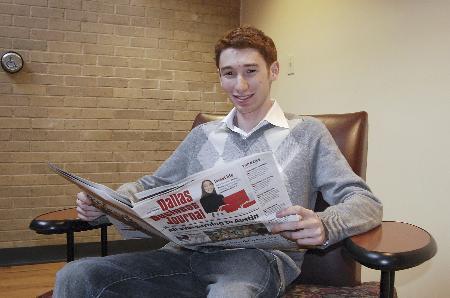 Editor’s note: The headline of this story was revised for accuracy at 9 p.m. Tuesday.

While most high school students were spending their summers sleeping in and hanging out with friends, Jeff Livney was interning at a California law firm and enjoying the summer beach.

After his sophomore year of high school, Livney decided to get an internship at a law firm. Unable to find a paid internship in his hometown of Houston, Livney began searching in California where his aunt lived.

Today Livney is in the Neeley School of Business majoring in entrepreneurial management and marketing and is a member of the BNSF Next Generation Leadership Program.

He also owns his own company and helps manage the Fort Worth branch of Buffalo Specialties.

“When I got to the law firm in California they assumed that all high school guys knew how to use computers really well,” Livney said. “My project ended up being building the firm a Web site, but I had no idea how to do that.”

He did have a friend back in Houston who did. So Livney contracted the job out to his friend.

“My friend designed the Web site, and I enjoyed my internship on the beach,” Livney said.

After the Web site launched, clients of the firm liked the site and asked Livney to design one for them. Livney passed the jobs along to his friend, still making a profit for himself.

“I started doing the Web sites as a little side project and funneled them to my friend,” Livney said. “It just grew from there.”

After his internship, Livney turned his side project into his own company, Livney+Partners, a full-service brand marketing firm.

“We do everything from developing a company’s brand, corporate image and logo to furthering the image through interactive media such as radio and TV,” Livney said.

Livney’s responsibilities include developing the company, meeting with potential clients, hiring and firing of staff, and sales.

At Buffalo Specialties he manages the designers who handle promotional products for Neeley School of Business, several Greek organizations on campus and other clients in the Fort Worth area including well-known companies such as Marriott Hotels, Beck construction company and the Texas Department of Agriculture to name a few.

Livney was named the 2006 TCU Texas Youth Entrepreneur of the Year and was a semifinalist for the Global Student Entrepreneur Award.

Brad Hancock, assistant director of the Neeley Entrepreneurship Center, said he is impressed by Livney’s maturity and professionalism.

“I think his accomplishments are just outstanding and incredible,” Hancock said. “He is an amazing young man to do this while going to school full time.”

Livney said he has learned to prioritize his time and also gives credit to his staff.

“I am a big-picture kind of person, and I don’t focus on little things that really aren’t important,” Livney said. “It’s helped me to prioritize things and focus on the things I have a passion for.”

Michelle Seliner, a client of Livney and the chief operating officer for S.A.F.E. Alternatives , a self-abuse treatment agency, said she was not aware of Livney’s age.

“It was a huge project for our company and I had no idea he was only 20 years old,” Seliner said. “But my experience with him was nothing but positive and he was thorough, responsive, and had great ideas.”

Megan Dewar, a junior business major and classmate of Livney’s, said he is incredibly modest and brings humor and insight to the classroom.

“I think he has brought inspiration to many people to do what he has done and shown them not to be afraid of failure,” Dewar said.

As for the future, Livney said he is not exactly sure what his next step will be. He said his company recently partnered with Admarc Southwest,an ad agency, and is looking forward to any new opportunities that may come his way.

“I am a live-for-today kind of guy,” he said. “My companies continue to have positive growth, and I want to keep building them and take on any new things that come my way.”