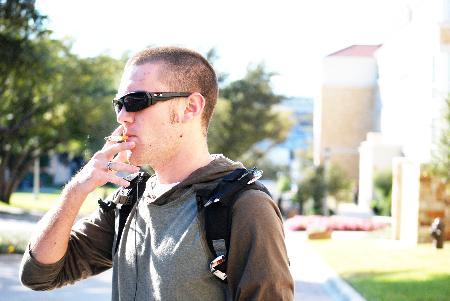 Freshman engineering major Robert Elliott gets the feeling people walking by him look a little too long when he lights up a cigarette outside Winton-Scott Hall.

“If students don’t like it, they’re not willing to put up with it,” Elliott said.

Despite the Student Government Association’s rejection of a resolution that would ban tobacco smoking in the Campus Commons, the university continues to receive complaints about student smokers, a university official said.

Don Mills, vice chancellor for student affairs, said the number of students smoking on campus is not increasing, but more students are complaining about it.

Students are mainly voicing their concern over smokers who gather outside the residence halls and entry doors to buildings, Mills said.

“This is an issue that has been discussed by municipalities,” Mills said. “There’s a lot of conversation about it.”

Yvonne Giovanis, assistant director of the TCU Alcohol and Drug Education Center, said the largest concern is for nonsmokers who have to walk through areas of campus or near doorways where others are smoking and breathe in the secondhand smoke.

By implementing a smoking ban on campus, smokers might be less inclined to light up, Giovanis said. However, smokers who are truly addicted to nicotine and are psychologically addicted to the act of smoking would most likely find ways to violate a ban, she said.

Reports from the Core Survey, a representative student survey conducted on campus last semester regarding the different behaviors around alcohol and substance use, show that 21 percent of students smoke on a regular basis, which is slightly below the national average of 26 percent, Giovanis said.

Elliott said he started out as a social smoker at the age of 18. He said when he joined the U.S. Army in 2004 he used smoking as an outlet to relieve stress and quickly became a regular smoker.

Four years later, Elliott said he still finds himself standing outside Winton-Scott Hall with a cigarette in hand.

Elliott said despite what some might say, a smoking ban would do little to decrease the sheer number of smokers.

“You can’t break peoples’ addiction by force,” Elliott said. “You have to want to stop doing it.”

Giovanis said to help those who want to quit, the TCU Alcohol and Drug Education Center has support systems in place to help smokers.

TCU is not the only university posing concerns about smoking on campus.

“I do think it’s a trend, and probably the way it’s going to go,” Carr said. “More and more you’re going to see that this will accelerate.”

Rosalee Rush, director of communications at Bloomsburg University of Pennsylvania, said the policy prohibiting smoking on campus was a result of the Clean Indoor Air Act approved by the state of Pennsylvania, which prohibited smoking in the workplace as well as locations defined as public places.

Rush said the university has not had any real issues with the new smoking ban.

“Of course when you put out an all-smoking ban you’re going to get some complaints,” Rush said. “But I wouldn’t say that we had a lot.”

Bloomsburg University of Pennsylvania already had designated areas on campus that prohibited smoking so students didn’t have much reaction to the ban, Rush said.

Carr said for a university to introduce a new policy like the smoking ban, the student body would need to be prepared for it.

“If the campus isn’t ready for it, then it certainly shouldn’t be implemented yet,” Carr said.

Mills said before the university would consider a smoking ban, it would want to make sure there was a general consensus, which would mean involvement from the SGA and the Faculty Senate.

“If there is a ground swell of support for a campus ban, the university would be amenable to that,” Mills said.