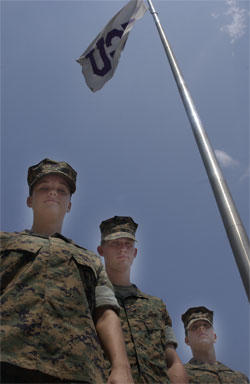 Senior Laura Crowe, along with two other TCU students, participated in officer candidate school this summer and graduated second in the nation out of all of the women who participated.Seniors Nathan Cross and Kevin Shipton, along with Crowe, were among 1,000 participants from across the nation in Quantico, Va. this summer for the Marine Corps.

“Early to rise and late to bed” is the best way to explain the daily experience at camp, said Shipton, a sociology major.

Crowe, a psychology major, said the training involved constant movement, and some days soldiers would be on their feet for more than 30 miles.

As challenging as it is, officer candidate school is not like boot camp, Crowe said.

All of the participants have the option to leave after four weeks, said Capt. Justin Noble, the selection officer who recruits for TCU.

Officer training camp screens for potential Marine leaders, and when they graduate, they do so as 2nd Lts., Noble said.

Although 2nd LT. is the lowest officer rank, it has authority over 14 ranks below it, Noble said.

Shipton said the challenge is motivating oneself to make it through the six weeks.

Cross, an English major, and Crowe agreed that self-motivation and knowing that you can do it was the best way to make it through camp.

Crowe was one of 45 women who attended the school and said she watched as her colleagues dropped out of the program.

“I wasn’t intimidated,” Crowe said. “I saw weakness in a lot of the girls and knew that I had the strength and will to go on.”

Crowe graduated from officer candidate school second in the nation among all of the women who participated in the camp, and a motivation for her was avoiding the inevitable “desk job” that comes after college.

Cross and Shipton said they agreed that their greatest inspiration was trying to avoid the same fate.

The Iraq war was also a factor of motivation for all three.

Knowing that people are in Iraq fighting helped make the decision to enroll much easier, Cross said.

Crowe said the ongoing war is not a fear factor for her.

“The war does not scare me, and I would go in a heartbeat,” Crowe said.

Service for all three students into the U.S. Marine Corps begins on their graduation day.

Noble said he will continue his recruitments at TCU.

“The goal at TCU is to have three full-time students go to the summer training camp,” Noble said.

Cross sought out Noble about candidate training school, and he said ways to attract students would be to tell them it will help them grow up, they will be paid and college life will not be affected because it is just a summer course.

“It is not for everybody,” Cross said, “but anybody who really wants to do it can do it.