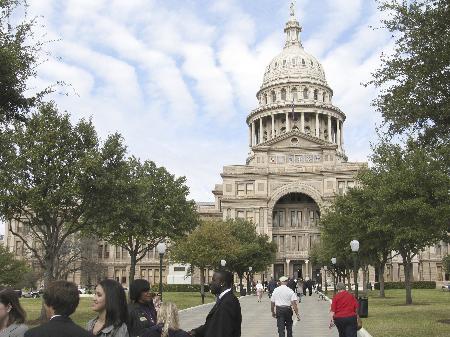 AUSTIN – Texas legislators met in their offices Feb. 11 and 12 not professional lobbyists, but a delegation of TCU students.

Seventeen student leaders selected by Student Body President Kelsie Johnson traveled to Austin to lobby for the Tuition Equalization Grant. The TEG is a need-based financial aid program that awards qualifying students up to almost $5,000 each academic year, Johnson said.

Johnson said that one of the group’s goals was to make sure that funding for the bill wasn’t cut as a result of the economy.

Mike Scott, director of scholarships and student financial aid, said 1,518 students at the university receive TEG funds. The average amount given to students is $3,560 per year, he said.

Johnson said the purpose of the TEG is to level the playing field between the cost of private schools and public schools for Texas residents.

“It takes students who wouldn’t otherwise be able to come to TCU and allows them to experience a private school education,” Johnson said. “It definitely makes our campus more ethnically and economically diverse.”

“It’s good for the individual students that receive the grant, and it’s good for the whole student body because it helps keep tuition down,” Adams said. “The $5 million coming into the financial aid budget is $5 million they don’t have to get from somewhere else.”

The lobbying students visited legislators in the state capitol building where they explained their position on the TEG and asked for support. Sen. Wendy Davis, D-Fort Worth, a TCU alumna, said it is nice to look into the faces of the actual students who are impacted by legislative decisions on bills like the TEG.

“For me, to hear this perspective from students from my alma mater is particularly compelling,” Davis said. “I don’t see any enemies lurking on an issue like this.”

Chancellor Victor Boschini met the student lobbying delegation in Austin and expressed his support for the program.

“I think it’s absolutely the most effective lobbying program, because you’re sending people who are recipients to the legislature,” Boschini said. “What it emphasizes to the legislators is, ‘Look at the diversity of students at TCU, this is what you’re investing in.'”

“It was good for the elected officials to put a face with names rather than us just sending letters,” Wallace said. “They sat there and genuinely listened to us. They actually get to see the students it effects on a daily basis.”

Johnson said the trip was very successful and needs to continue in the future.

“I think it is very important to continue sending students instead of professional lobbyists,” Johnson said.

The funding for the TEG will be voted on in May near the end of the legislative session.