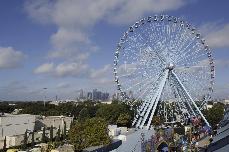 There is an old saying that goes, “Everything’s bigger in Texas.”

If there is any truth to that saying, then the State Fair of Texas is no exception.

Rolling into town with a Texas-sized itinerary full of good food and entertainment, students recollect on their favorite parts of the fair.

For freshman broadcast journalism major Katie Vance, the State Fair’s midway area, with its various games, has always been an enjoyment. To newcomers, she suggests what one State Fair must-do.

“Ride the ferris wheel even though the lines are long,” Vance said. “It’s fun to ride at night and see the fair all lit up.”

In the case of Brian Hoang, a junior computer science major, it has been a while since he last attended the State Fair, but if he remembers anything, it is the food, particularly the fried Snickers.

She also suggests making sure to bring lots of cash for your fair food splurge, as no vendors accept debit or credit.

Junior communication studies Brianne Kennedy has had the opportunity to visit other state fairs, but will be making her first trip to Fair Park this year. Sampling the unique foods, which vary by region, is at the top of her to-do list, she said.

While many would consider the fair a good time, there are others who are quick to disagree.

Kayla Carrol, a sophomore Art History major, had only two words to describe the State Fair: dirty and crowded.

Her words were a little kinder when talking about the food, however. She called it good, but very unhealthy.

Regardless of hearsay, the State Fair of Texas is truly a one-of-a-kind event that should be experienced at least once by those who have the chance.