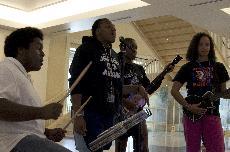 The lyrics “Picture yourself in a boat on a river, with tangerine trees and marmalade skies” echoed in the first floor of the Brown-Lupton University Union on Wednesday as students crowded around two “Rock Band” games and waited for a turn to play music just like one of their favorite bands, The Beatles.

In honor of Beatles Day on campus, two plasma TVs equipped with two plastic electric guitars, one drum set, one microphone to share and “The Beatles: Rock Band,” were set up for students between noon and 6 p.m. in the BLUU.

Staff from the BLUU bobbed their heads and tapped their feet to popular Beatles hits. Cindy Nguyen, a cashier for the BLUU, said she thought playing “Rock Band” gave students time to relax and do something exciting between classes.

Evann Jackson, a freshman computer science major, said he had been playing the “Rock Band” drums for more than an hour.

“I think it’s a great way to forget that I’m not at home,” Jackson said. “I was nervous that I wouldn’t find the same amenities of home, and here they are.”

Rogelio Castillo, a freshman pre-major, said “Rock Band” gave the BLUU a more vibrant atmosphere. He said he loved playing the guitar to his favorite Beatles song, “Lucy in the Sky with Diamonds.”

“Who doesn’t like playing to The Beatles?” Castillo said. “It’s one of those games that’s really out there and not the sort that is so repetitive.”

Kelsey Samuels, a freshman business major, said she fell in love with The Beatles after seeing the 2007 movie “Across the Universe,” a musical featuring several of The Beatles’ compositions. Samuels said she had never played “Rock Band” before, but she could not pass up the opportunity to jam out to her favorite band.