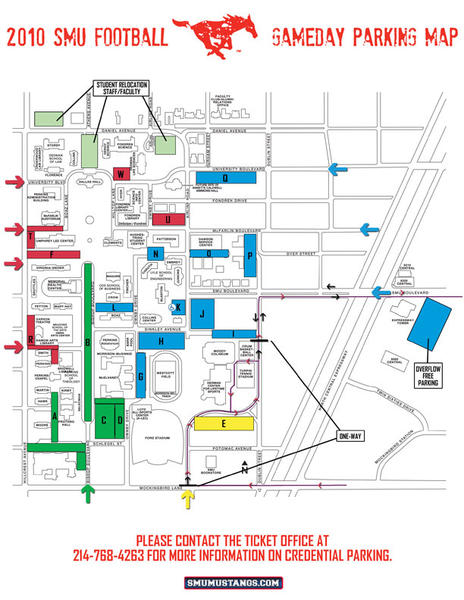 TCU football game against SMU in Dallas this Friday should make plans to leave early because traffic and parking will be hectic, an SMU official said.

SMU Associate Athletic Director of Public Relations and Marketing Brad Sutton said he expects that there will be far more cars than parking spaces due to the fact that the campus is located in a dense area of a big city.

The SMU campus has 23 different parking lots, and anyone coming from TCU should plan to park in the red or blue cash lots. The J-L lots cost $20 and the N-W lots are $10 per spot. The best entrances for the lots off of the US-75 Central Expressway will be from SMU Boulevard and University Boulevard.

There is a free lot, also known as the DART Lot, which is located off campus and across US-75. It is directly east of campus and is at the corner of SMU Boulevard and the Central Expressway. This lot will have frequent shuttle buses before and after the game transporting fans to and from Gerald J. Ford Stadium.

SMU recently purchased a piece of land south of Mockingbird Lane that currently serves as a parking lot, known as Mrs. Baird’s site. This will be used as a cash lot, but is not yet on any maps due to its current construction.

Tailgating is allowed in all lots at SMU. In addition, TCU students have been invited to join the SMU students in their tailgate, which is at the North End of the boulevard near Dallas Hall.