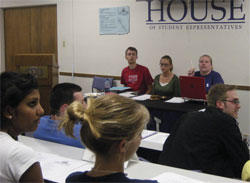 Student Government Association celebrated its 93rd anniversary Tuesday evening with a discussion about the plus/minus grading system and the introduction of two bills, which will be addressed at next week’s meeting.Although there was a discrepancy in numbers from SGA members, it was reported that as much as 87 percent of students who took the online poll said they disagreed with the proposed plus/minus system.

“We are going to present the survey to him and see what he thinks,” said Thompson.

Detailed results from the survey will be discussed at next week’s SGA meeting after discussing the survey with Donovan, Brown said.

A report from the Student Relations Committee said about 80 percent of students voted against the plus/minus system.

SGA members said these numbers are estimates and official results will be released in full detail next week.

A resolution to support the plus/minus grading system was brought up by Jason Ratigan, a senior representative.

Leer, a senior accounting major, said the resolution will also be discussed again next week.

After the discussion about the plus/minus system, a bill was assigned to to the Recruitment and Retention Committee for research and discussion.