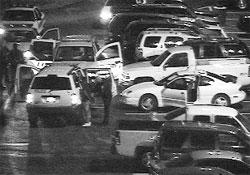 After finding the car’s owner, Britt learned there was an iPod car mount and a CD player missing from the car.

Chris Culpepper, owner of the car and a teacher at North Crowley High School, said his driver’s side window was broken, but some of the most valuable items in his car were still there.

“They left the most valuable stuff in my car but destroyed my car in the process,” Culpepper said.

Before Culpepper left the scene, he found out undercover officers at TCU, blocks away from where his car was burglarized, had caught three suspects whom officers said were attempting to burglarize a car.

Dale Connor, one of the undercover officers in the freshman lot, said the way one of the suspects was walking around the lot made him suspicious.

“Most people walk with a purpose,” Connor said, “like heading back to the dorms, but this guy was kind of just strolling along.”

Connor said he was circling the lot in an undercover vehicle when he noticed the suspect. As Connor continued to circle the lot, imitating a student looking for a parking space, he saw something that he said peaked his suspicion.

“I actually saw him holding a screwdriver and I actually thought he was approaching one of the vehicles like he was actually fixing to pry on a window,” he said.

As Connor continued to patrol, he said he looked toward the suspect and when the suspect saw him, he immediately stopped what he was doing and walked away from the car to join the other two suspects in their 1997 white Pontiac Sunfire.

Connor said he then pulled up in the undercover car and approached the three suspects, who he said complied with his orders and were arrested by Fort Worth police officers.

By the time Connor approached the car, other officers had sealed off the parking lot and more officers in marked cars were arriving to assist him.

Soon, Culpepper arrived at TCU and identified his stolen property found in the suspects’ car while the suspects were still in the parking lot.

“It was irritating to walk up and look at somebody in the face who has no regard for your stuff, or you or other people whatsoever,” Culpepper said.

Sgt. Kelly Ham accessed surveillance cameras mounted above the freshman lot and watched the arrest live from his home. He said making these arrests sends a message to potential burglars.

“TCU’s like a shopping mall at Christmas time,” Ham said. “A lot of cars get broken into because they’re all right there and they’ve got shopping packages in them. We’re trying to prove them wrong, that this is not the place to come.