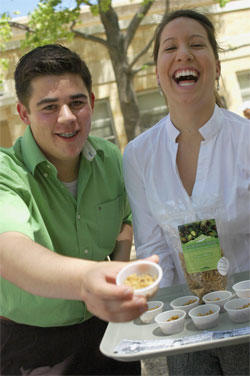 Justin Avery Anderson wore a bright green shirt and a big smile as he handed out free samples of his Anderson Trail Inc. Moist Granola Monday afternoon in front of Frog Bytes.Anderson may only be a freshman, but Frog Bytes began selling his soft-baked, moist granola Sunday.

The 19-year-old pre-business major from Houston said he approached TCU Dining Services in August on his own with no success, but approached the Student Government Association’s dining services committee in February.

Anderson said the committee then helped him achieve the success he has today.

Committee chairwoman Alissa Garner said Anderson had to go through a process to receive permission to sell his product in Frog Bytes from Sodexho, the company that caters for TCU.

“We pointed Justin in the right direction,” Garner said.

Abato said it is really hard to tell what will sell but that Anderson’s product is coming out at a good time.

“I’ll eat Power Bars, but this has a lot less preservatives,” Crawley said.

Amanda Randklev, a freshman news-editorial journalism major, bought eight bags of the granola Monday for herself and two friends. One friend, sophomore sociology major Jesse Gabel, said, “After a free taste we had to buy a bag or eight.”

Megan Smith, a sophomore finance major from High Point, N.C., also had a positive reaction to the free sample. She said before she had only tried Nature’s Valley Granola Bars, but Anderson Trail is better because of how moist it is.

“I think it’s awesome he is a freshman and he already has a company,” Smith said.

Anderson first began his company when he was 16, after tasting moist granola for the first time on a vacation to New Mexico.

Anderson’s granola currently sells for $6.99 at Central Market stores across Texas and $6.59 in Frog Bytes.

He said plans for Anderson Trail Inc. include working on a business plan to present to investors and growing the company over the summer.

“I hope to turn it into a complete operation,” Anderson said.

Anderson won the 2005 TCU Texas Youth Entrepreneur of the Year Award and received a scholarship that enables him to attend TCU for creating Anderson Trail Inc.