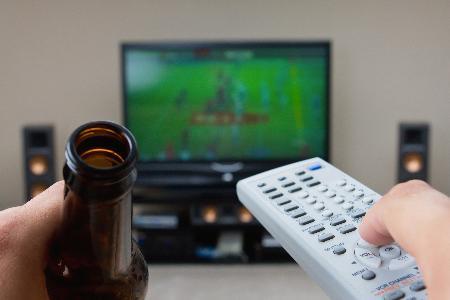 Andy Dalton threw for 226 yards and two scores to lead the Frogs to an impressive victory over Clemson.

And you missed it because you have cable? Or so the popular football game day commercials go.

However, for TCU fans, the cable was not the issue on Saturday. The issue was that the game was not broadcasted on television at all.

Before Saturday, it was virtually impossible to forecast just how epic this football game would be upon conclusion. But hindsight is always a sparkling 20/20, which makes ESPN’s decision not to broadcast the game on television even harder to swallow for a couple of reasons.

First, a team ranked No. 15 in the nation, regardless of which team that might be, playing as historic of a program as one will ever get in Clemson deserves to be on television for no other reason than this. ESPN owns the television rights to this game, but chose instead to broadcast games between unranked teams (such as Michigan State vs. Wisconsin, for example) with far less reaching implications. This leads right into another issue.

Despite Utah’s magical season last year, the Mountain West Conference continues to be grossly overlooked and underrated, and undeservedly so. This argument has been made over and over again the past few seasons for good reason. A conference with as many teams ranked in the AP top 25 (with another receiving votes) as several “automatic qualifiers” has earned some TV time.

Third, the game had everything a college football fan could ever dream of. It had two great programs with rich histories, squaring off for respect and recognition with huge implications for the end of the season. It had big names, big plays, plenty of rain and a nail-biting finish. Regardless of kickoff time changes and scheduling conflicts, this kind of contest is one that should be displayed nationally.

Instead, ESPN chose to be selfish with its TV rights and bypass the opportunity to broadcast an intriguing matchup in favor of others. It was delegated to ESPN360.com, an embarrassingly small venue for such a great matchup. Not to mention the fact that many households either do not receive it or will not spend the effort to log on and deal with the Internet. In short, more people were watching sonograms than tuned into TCU/Clemson.

When the final gun sounded, the Frogs were victorious and most of the nation had missed out on a fantastic game. ESPN could have eased the pain of many fans by simply recognizing the fact they could not broadcast the game and releasing the rights to the local media instead. This would have at least allowed fans in the competitors’ markets access to the game on television.

ESPN really dropped the ball on this one. I hope that they have learned their lesson and that fans will not miss another game like this one, even if they do have cable.

Shane Rainey is a junior chemistry major from Fort Worth.