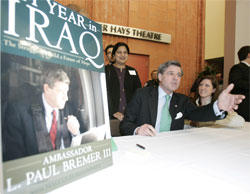 The American who oversaw Iraq’s first steps toward democracy told about 500 students, faculty and citizens at Ed Landreth Auditorium that he thinks he’ll see a stable Iraq in his lifetime.Paul Bremer, who served as presidential envoy to Iraq from May 2003 to June 2004, said Friday that the most important result of the war in Iraq was getting the Iraqis on a path to democracy.

“We did a really noble thing in liberating 27 million Iraqis from one of the most brutal dictatorships anywhere in the world at the end of the 20th century,” Bremer said.

Although some critics predict a civil war in Iraq, Bremer said, he is optimistic about the future of the Middle-Eastern nation and hopes Americans will be patient as the war-torn country continues its struggle toward democracy.

“I don’t think you win a war by setting a timetable,” Bremer said.

Chancellor Victor Boschini said he was pleased with the relevance of Bremer’s TCU visit.

“This could be the most important issue in America right now: security,” Boschini said.

Bremer was promoting “My Year in Iraq: The Struggle to Build a Future of Hope,” a book his wife and children encouraged him to write.

“I thought it was important to make a record of what we tried to do while it was still fresh in my mind and in the minds of my colleagues,” Bremer said.

During the lecture, Bremer read several excerpts from his book, including the story of a malnourished, 7-month-old Iraqi girl he visited in a hospital.

“I was responsible for her and thousands like her,” Bremer said. “Having authority as administrator meant nothing if I couldn’t bring some improvement to the lives of ordinary Iraqis.”

Inside the auditorium, TCU students offered mixed opinions about the war.

Jason Knutzen, a freshman radio-TV-film major, said he initially supported the war but is now against it because it’s dragging on.

“I don’t think it’s our place to be in another country telling them what to do,” Mock said.

Megan Osborn, a freshman secondary education major, did not take a side on the issue.

“I don’t know everything there is to know about it so I can’t make an opinion,” Osborn said.

After the debate, Rodney Thomas, a Brite Divinity graduate student, said he felt the lecture was more of a promotion for Bremer instead of an educational forum on Iraq.

Boschini said the lecture was a “wonderful educational opportunity for TCU students.”

He added the event was one of many TCU is planning in collaboration with the World Affairs Council of Dallas/Fort Worth.