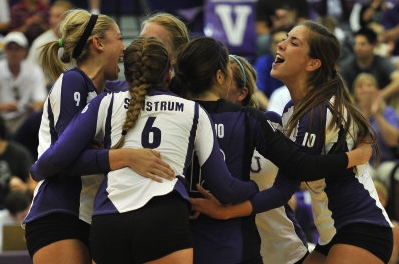 The TCU volleyball team won the Rutgers Invitational tournament under the leadership of senior Irene Hester, who was named the tournament MVP. The Horned Frogs defeated Princeton, George Mason and Rutgers to come in first at the tournament last weekend.

The team began the weekend with a 3-0 win over Princeton Friday, dominating the first set and winning 25-18. The Tigers began to come alive during the second set, but the Horned Frogs tied it up 15-15 and proceeded to go on an 8-4 run, winning the set 25-20. The last set was a back and forth battle until the Frogs pulled away at the end, winning 25-21.

The next morning TCU swept George Mason, again winning 3-0. Hester led the team to victory with seven aces. All three sets went back and forth with no team able to pull away from the other. TCU won the first set 25-19. Sophomore Meghan Horio provided the set point in the second set and senior Christy Hudson finished off the game and the Horned Frogs won the set 27-25. The final set was tied 21-21 until junior Jordan Raines had back to back kills to stop the George Mason rally and TCU won 25-21.

TCU pulled out a 3-2 win over Rutgers to win the tournament. The Horned Frogs racked up a quick 25-15 win in the first set. Rutgers battled back to win the second set 31-29. TCU dominated the third set with a 9-4 run to start. Meghan Horio had back to back aces to force a Rutgers time out. The Horned Frogs kept rolling out of the break and won the set on a Rutgers service error that gave the Frogs a 2-1 lead in the match. Rutgers proceeded to rally again at the start of the fourth set and won it 25-16. TCU had to keep fighting off rallies from the Scarlet Knights, but they did not give up the lead in the fifth set and Irene Hester locked up the win with a kill to give TCU a 15-13 victory. Horio was named to the all-tournament squad.

Horned Frog volleyball returns to campus Sept. 17th to host the Nike Invitational and will face Ohio University, the University of Alabama-Birmingham and UTSA.