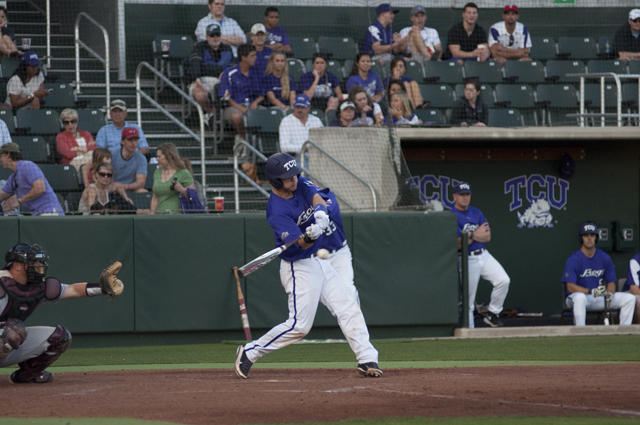 Twelve hits allowed the No. 14 Horned Frogs to reach their 13th win on the season as they overpowered the Texas State Bobcats (15-5) Tuesday evening at Lupton Stadium by a score of 3-1. Despite trailing Texas State for the majority of the game, head baseball coach Jim Schlossnagle said he was very proud of TCU’s effort, especially on offense.

“It’s been a while since I’ve been as impressed with a group of hitters in this park under these conditions as I have with these guys,” Schlossnagle said.

Throughout the game, 11 fly balls were caught for outs, largely due to the strong wind out of the north which blew from left to right field in Lupton Stadium.

“We hit a lot of balls hard into the wind,” Schlossnagle said. “They hit some too, but I thought we hit more than they did.”

The 3,791 fans in attendance weren’t particularly loud, except for during a few errors and controversial calls 8212; the most significant of which came in the bottom of the seventh. TCU junior center fielder Aaron Schultz hit an RBI single to right field with two outs, bringing Pharr home and junior right fielder Brance Rivera to third base. Frogs junior shortstop Taylor Featherston hit a line drive so hard to the left-field gap that the umpire couldn’t avoid being struck. At that point, the play was dead, loading the bases, but not allowing what would have been an easy run for Rivera.

With the count at 2-2 with two outs, junior left fielder Jason Coats grounded to Texas State third baseman Kyle Kubitza. Kubitza was the only Bobcat to score in the game (on an error), but on Coats’ grounder he recorded his own error fielding the ball which allowed Rivera and Schultz to score before he tagged Featherston out at third base to end the inning.

When asked what he thought about Featherston’s ball hitting the umpire, Schlossnagle sighed and smiled as he said, “it was a challenge and I thought our guys handled it well.”

Although there was only one lead change in the game, the more significant change during the game came in the form of momentum. In the top of the second inning, Pharr overthrew second base, allowing Kubitza to advance to third. Shortly after, Kubitza scored after Pharr didn’t connect with TCU sophomore third baseman Jantzen Witte.

TCU associate head coach Randy Mazey had a few words with the infield that were audible through most of Lupton Stadium, which Schultz said changed the defense’s momentum in the ballgame.

“I think it helped us tighten down a little bit, especially in the infield,” Schultz said.

Another setback for the Frogs came in the top of the eighth inning when Pharr was struck in the midsection by a pitch and was down for a considerable amount of time. Pharr eventually walked it off and kept on playing.

“I’m really proud of Jimmie,” Schlossnagle said. “He’s the guy that’s really been the unsung hero in our club. He’s played really well for us, and I can’t imagine where we’d be without him.”

TCU will begin a three-game weekend series against the University of Houston at Lupton Stadium. First pitch will be Friday at 6:30 p.m.