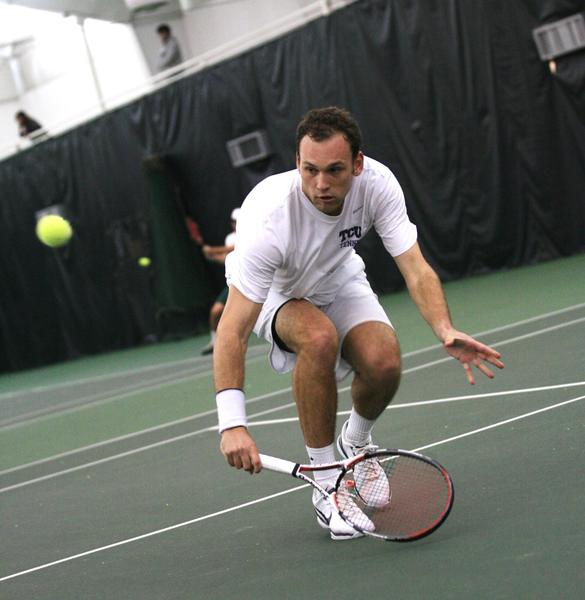 TCU tennis got off to a strong start this weekend with dominant performances by both the men and the women.

The two teams had three total matches on Saturday and Sunday at the Bayard H. Friedman Tennis Center.

The action started on Saturday with the women’s match against UT-Pan American. The women swept UTPA 7-0, not losing a single set along the way.

The Lady Frogs combined to win 96 games while conceding only 17. Both Idunn Hertzberg and Federica Denti each posted 6-0, 6-0 shutouts in singles play.

“This is such a great group to work with, and I’m glad they were able to pick up this win,” women’s coach Dave Borelli said.

The TCU women are ranked No. 51 in the nation to start the spring season. They continue play Jan. 28 at the ITA Kickoff Weekend in Berkeley, Calif.

Sunday consisted of two men’s matches, the first against UT Arlington, and the second against UTPA.

Both of Sunday’s matches ended in 6-1 wins for the Frogs. The Frogs had to battle the cold weather in the UTA match Sunday morning.

“Everyone just came out to try to play their own tennis,” senior Cameron Nash said. “We knew it was going to be cold, but we just stuck to the game plan and what we’ve been working on all last semester.”

Nash earned the clinching fourth point with a 6-4, 6-0 win in his first ever singles match.

Price said it is more mentally tiring than it is physically, but the adrenaline kicked in to push him through the last match.

The Frogs’ later match against UTPA was moved to the indoor facility at the Friedman Tennis Center due to the cold weather conditions.

The TCU men jumped out to the early advantage with a win in doubles play, sweeping all three sets. Daniel Sanchez and Zach Nichols were able to bounce back from their loss in the early match and come away with an 8-3 win.

Slah Mbarek continued his solid singles play against UTPA. Mbarek cruised to a 6-1, 6-3 win over Matt Teivans. The junior won 24 singles games and only lost 10 in Sunday’s matches.

“It was a tough challenge for our team to start the year with a double header,” coach David Roditi said after the match. “I’m proud of the way we handled the change in venues and all of the emotions of a home opener.”

The men are currently ranked No. 49 and continue competition on their home court on Jan. 29 against Texas A&M Corpus Christi.