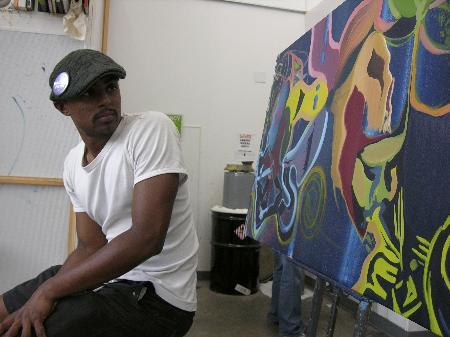 Whether it’s working under a looming deadline or learning to work as a team, sometimes tension can inspire great art.

The Tension Art Exhibit is a project for associate professor Cameron Schoepp’s Seminar in Art Professions, a class required for juniors in the studio art major. The gallery’s opening has spent a semester in the works, with students having to find a space, fix it up to showcase their talent and most importantly, find people to attend.

Junior studio art major DJ Perera said he and other students coordinated the show by cleaning up the warehouse which now houses the student works, even if that meant having to clean the bathrooms. Fellow junior studio art major Laura Keith set up the Web site for the exhibit and networked with contacts to get the word out about the show.

Schoepp said he teaches students to work together as a team even when problems arise as this year’s class learned that firsthand. He said the students had entered into a verbal agreement with the landlord of a space to show their art there but at the last minute, the landlord backed out. To the students’ relief, Schoepp said, he had them choose backup locations just in case they fell into such a situation.

“I think there’s a lack of understanding about the complexities of doing something like this and that’s always an eye-opener for the students to realize how much work one has to go through to put on a show,” Schoepp said.

But all the work behind the scenes leading up to the unveiling of the exhibit March 28 takes a backseat to the artists’ works in the spotlight.

Born in Qatar to parents who had immigrated from civil-war embattled Sri Lanka, Perera said his birthplace in the Middle East wasn’t a society open enough to fully appreciate art. His passport shows him being a citizen of Sri Lanka because he said in Qatar it’s difficult to gain citizenship as the child of immigrants and even more difficult if as a non-Muslim. Perera arrived on U.S. soil at age 18, already having received a Western-style education.

He said he draws more inspiration from the rainforests and the colorful culture of his parents’ homeland and it shows in his art. Bright colors jump right off the canvas, evoking what Perera describes as everyday issues like life, love, religion and sex.

As a child, Perera got his first start in art like many others his age. His experiments with coloring books, although he looks back on them as “terrible,” were a stepping stone to later work in watercolors before he settled on oil paintings three years ago.

All of his works are untitled and will remain that way. Perera said he wants his art to speak for itself and not limit the interpretation of it by name alone but if it’s one thing that he wants from all the showings, commissions and contacts he’s made, he wants to make a name for himself that people can trust to produce good art.

“In the art world, when you say ‘good,’ it’s not necessarily about skill, it’s about your persona,” Perera said. “You can be a genius when it comes to artistic abilities, but if you can’t get the respect of your peers, your paintings will not go that far. You represent your paintings.”

Junior studio art major Laura Keith said she has been painting since taking art classes in kindergarten. With each step, her work has been evolving. Her initial focus on ink paintings shifted to black and white as she started to try new ideas, oil paintings soon followed and now she works with colored oil.

She said she knew she wanted to pursue art for a living when she entered college and that about a year ago she started to “dive into” the local art scene, whether it’s guest speaker lectures at the Modern Art Museum of Fort Worth or a new gallery opening like the Tension exhibit.

The process for art is as unique as each individual that creates it. For Keith, she has to tune out all distractions. Immersed in the music of her favorite band Radiohead, the headphones won’t usually come off for three hours at a time when she lets all the things that have happened to her and the environment around her come out through each brush stroke. Keith still factors in her experience painting with ink in her work and it shows in her stark use of shadows and pale greys.

“If I don’t feel like finishing this one, I’m going to start a new one. Wherever it takes me, I just go,” Keith said. “If something happens and there’s a mistake, I’ll leave it and come back to it later because maybe I did that for a reason.”


Perera doesn’t wait for a particular mood to come to him. He said he goes on instinct alone, usually spending six to nine hours painting. When it comes to all the lectures, the teaching and the readings, Perera said it all ends in the hands of the painter and how he or she feels. He takes his time working on several paintings simultaneously but said that there are no set plans on concentrating on one section before another. Perera has his favorites when it comes to color. His favorite is pink, he doesn’t use green and he has almost always started out with a base color of blue.

“If you’re working on two canvases, it’s not like a coloring book where you color page 46 and then you’re supposed to color page 47,” Perera said. “You have to bring it up together.”

The late nights are nothing new to him. School breaks like Thanksgiving and Spring Break are not spent with family, but rather where Perera calls his second home – the Moudy North building that houses the art studios.

Schoepp said that he has seen some of his former students using some of the skills they learned in the class in the professional art world as they build their way up one canvas at a time.

Perera and Keith are just two of 15 artists shown in the exhibit.