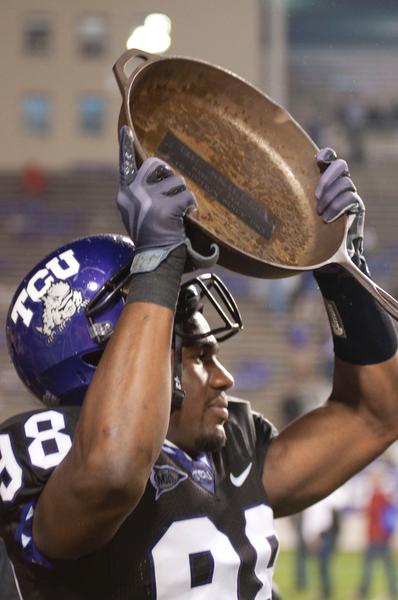 Head coach Gary Patterson is taking his No. 4 Horned Frogs to the movies, and he hopes they don’t like the ending.

Patterson said he planned to show SMU’s celebration video from its 2005 win over the Frogs during practice today. For the first time this year, TCU will not have any returning players from the 2005 squad.

In 2005, the Frogs went to Dallas and lost 21-10 to SMU. The loss came one week after TCU upset then-No. 7 Oklahoma in Norman. It was the Horned Frogs only loss that season and the Frogs’ only loss to SMU in eight games under Patterson.

Patterson said SMU head coach June Jones has been running the ball more effectively, which has been reflected in offensive rankings. Last year, SMU finished 98th in the country in rushing. In three games this year, the Mustangs now rank 49th.

The SMU rushing attack is led by sophomore Zach Line. At 235 pounds, Line is a big running back that plays well in the Mustang system of offense, Patterson said.

On the TCU side of the ball, Patterson said he wanted to create more opportunities for senior wide receiver Jeremy Kerley.

“Kerley’s one of those guys who gives you a lot of problems in certain situations, and we’ve got to keep doing it [to other teams],” Patterson said.

Patterson also said he was still looking for a short-yardage running back similar to last year’s leading rusher Joseph Turner, who graduated.

TCU will be the highest-ranked team ever to visit Gerald J. Ford Stadium, which opened in 2000.