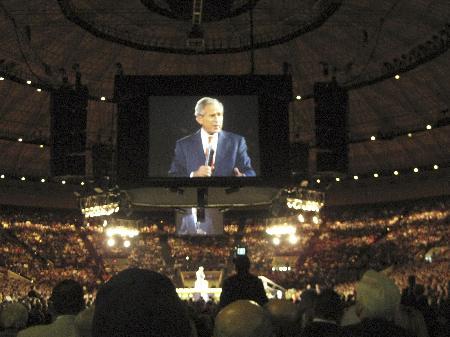 Former President George W. Bush told thousands of people gathered at the Fort Worth Convention Center on Monday to not shy away from making difficult decisions and to obey their conscience.

In his speech, Bush defended his decision-making during his two terms.

“You have to be willing to make decisions. . . I never shied away from decisions,” Bush said. “It’s so simple in life to chase popularity, but popularity is fleeting; it’s not real. What is real is a set of principles, principles etched into your heart, and my advice is always follow your conscience.”

Bush and former Secretary of State Colin Powell highlighted a group of some of America’s top politicians, motivational speakers and business people at the convention center for a business seminar called “Get Motivated!”, a one-day seminar designed to help audience members sharpen their business skills and motivation. The speakers attracted some university students looking for tips to succeed in the business world.

Powell said it was important to continue to push for the education of young Americans.

“The most difficult problem we better tackle is. . . the education of our young people,” Powell said. “Too many of our kids drop out of high school.”

While numerous speakers at the event applauded students for attending, students encountered a familiar problem when driving into downtown parking. At least three students had their vehicles towed from a parking lot at the intersection of Houston Street and Lancaster Avenue. The lot is owned by the post office. A postal worker estimated that up to 75 vehicles could have been towed from the lot, although the number has not yet been verified by the towing company.

Fort Worth police at the site would not comment about the towed vehicles.

Clayton Thomas, a senior supply chain management major, parked in the lot from the Fort Worth Convention Center only to find that his truck had been towed when he returned to the parking lot.

“I’ve parked here before to catch the Trinity Railway Express to Dallas, but I come back out this afternoon and my truck is gone,” Thomas said. “On the sign it says patrons only, but it doesn’t say patrons of what. It was very deceptive. Now I’m out one pickup truck.”

Men monitored the parking lot to see if people parked in the post office parking lot and then walked to the convention center, he said.

“I just don’t understand that if there’s a person in the parking lot just counting us, why doesn’t he say, ‘Hey, you’re going to get towed,’ and make us move.” Thomas said. “Now we have to pay $250 to get our cars back. Not very motivational.”