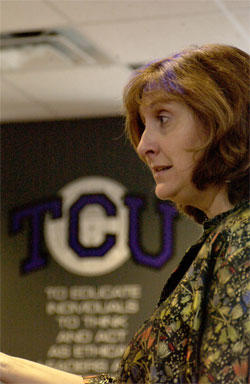 Dr. Pamela Stuntz was hanging up the last of the balloons in a colleague’s office at Whitley Penn and Associates accounting firm for the next day’s 40th birthday celebration when the phone rang. “Your son has been shot in the head by a high-powered BB gun,” the paramedic on the phone said.

It was the plight of a mother that got Stuntz to the hospital on that cold day in January 1992 before the ambulance even arrived. And it was the hope of a mother that kept her by her only son’s side as the prognosis went from a minor emergency to a life-threatening situation in a matter of hours. Fifteen-year-old Travis’s speech stopped making sense and he could not move his right side.

“Your son may not make it through the night,” the neurosurgeon told her.

The memory of the pain flickered in Stuntz’s eyes as she described the life-changing event that brought her from her accounting desk to her office in Winton-Scott Hall at Texas Christian University.

“I quit my job three days after the accident,” she said. “I lived at the hospital with my son.”

Although the accident was ultimately not fatal, it affected Travis’ memory, made simple math impossible and changed his personality.

“The brain injury made him unable to show emotion,” Stuntz explained, “but we knew he was in there.”

She wanted to know everything that was happening with her son.

“If he went to a training session, so did I,” Stuntz said.

After three months of therapy, Stuntz refused to believe the doctors’ prognosis that Travis would never return to high school. She pushed him toward a full recovery, repeating all the exercises from the hospital at home.

The following August, Travis started his sophomore year of high school as if he had merely taken a short vacation. The only thing different was instead of being enrolled for honors math, Travis was on the regular track.

Stuntz tried to return to accounting after her son was back in school, but something was not right.

“Accounting was no longer satisfying for me,” she said. “It didn’t give my life any meaning.”

She became an advocate, stopping to tell her story to customers in the checkout line at Wal-Mart with the BB gun that almost killed her son in their hands. She wrote letters to get the gun considered a weapon in Texas.

She read books about brain injury recovery stories. She was fascinated by how the brain worked, and how parts stopped functioning after injury.

Stuntz thought back to the conversations she had with the therapists during her son’s recovery about the lack of brain injury research. She felt her calling.

At 38 years old, Stuntz was determined to do something about it. She made an appointment with the chair of graduate studies in psychology at TCU. She would have to take 30 hours of undergraduate psychology classes, an independent study, and score well on the GRE that year before she could even consider getting into graduate school for psychology.

With the same determination Stuntz had to help her son recover, she went back to school to receive her second undergraduate degree, finishing her classes with straight A’s and starting graduate school in 1996.

“Travis was at TCU at the same time I was,” she explained. “He was pretty tolerant for someone his age when he saw his mother in the halls.”

Stuntz went on to graduate school at TCU, where she was mentored by Dr. Timothy Barth through her dissertation.

Pamela came to me with a very compelling story,” Barth said, describing the time they met. “She always had a level of commitment and motivation that is essential, and she brought to the research first-hand knowledge of brain injury that none of the rest of us had.”

In graduate school, Stuntz began her brain injury research on rats, which she continues today.

The research is conducted by first brain-injuring the rats. Then Stuntz gives the rats different kinds of drugs and tests them in underwater mazes to see if the recovery happens quicker and better than it would naturally.

“I really think if we gave drugs to brain-injured patients, they would have better recoveries,” Stuntz explained. “But you can’t see for sure until you’ve worked with humans and that is a touchy subject.”

Stuntz received her doctorate in physiological psychology in 2003, and because of a shortage of professors that year, was asked to teach psychology courses at TCU.

“I kind of fell into teaching,” she said. “My original goal was to do research. But when I am able to teach college-age kids about the brain, about the drive of the human spirit,” she paused, “that’s when I make the biggest impact.”

Stuntz often has students in her office just to talk about life. She considers herself a surrogate mother to the young adults who have just left home.

“There are a lot of hurting students that need something,” she said. “I just want to be there.”

Junior Antoine Scott described her as a teacher and friend.

“At times you forget she is your professor and think of her as your mom,” he said.

Even though he currently doesn’t have class with her, Scott said he often stops by her desk to chat.

“She is very open to all her students and has a lot of wisdom and advice.”

Stuntz said she doesn’t miss a TCU graduation, and, like a mother, it always makes her cry.

“In accounting, you are trained to see the product of your work,” she said. “Every semester, I get to see my products walk across the stage with a big smile on their faces and get their degree.”

Travis Stuntz became a founding father of the Pi Kappa Phi Fraternity while at TCU and now, at 29, has a full-time job and is going back to school at night to become a nurse. He described the role his mother has had on his recovery and his life.

“She has been my main supporter, my coach, my protector.”

When asked to describe his mother, he paused for a brief moment in thought.

“My mom …” he said slowly. “She has just been an amazing inspiration to my life, and she says the same about me.”

He added, “Everyone who has her for class or knows her should feel blessed to have her in their life in the same way I do.”

Pamela Stuntz, speaking from a life as a successful accountant, a determined and loving mother, an eager student, a motivated researcher and a passionate teacher, had one last thing to add.

“It may take something traumatic, but you have to have a passion in life. You have to love what you do. I almost had my child taken away, but that’s why I am where I am today.